On Saturday morning my alarm went off at 4am. Luckily, we were staying at the Paradise Pier Hotel, so the start line was just a few minutes walk away. I had my outfit all laid out from the night before so I just had to put on my clothes and running gear and head out the door.

My family decided to dress up as Winnie the Pooh and Friends. Sadly, we didn’t get a picture of all of us together until after the race and we were standing at an awful angle, so it is a very bad picture due to sunglare 🙁 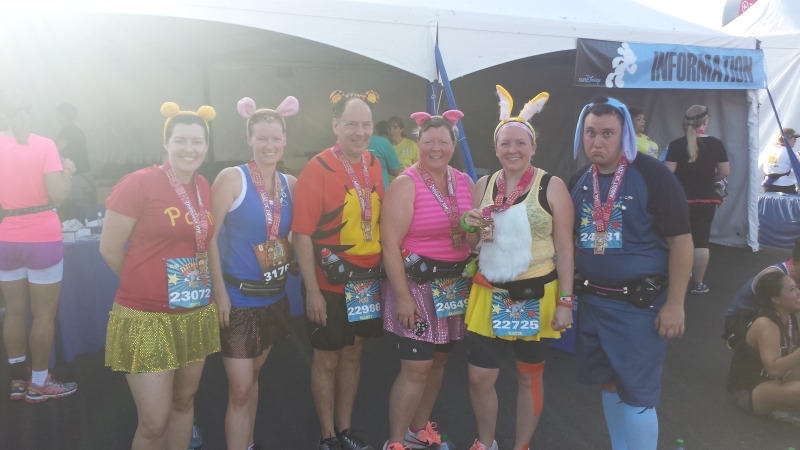 Nathan and I got to the staging area in plenty of time. We stopped for some pictures and jumped in line for the bathroom before heading to our corrals. 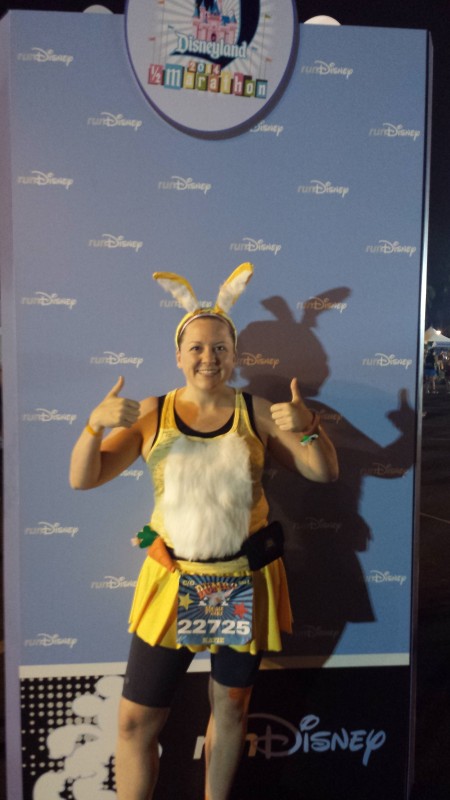 1. Nathan really doesn’t like to take a lot of pictures AND 2. He was playing the part of Eeyore very well. I mean, look, he’s not even looking at the camera! 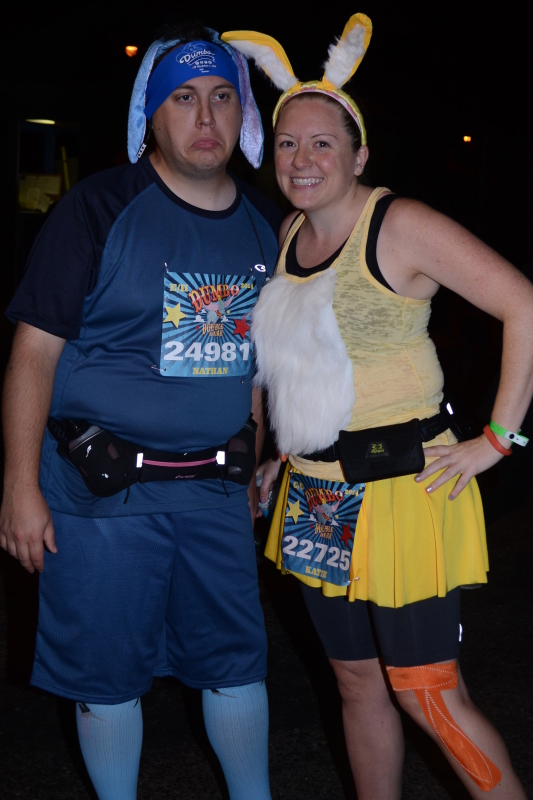 Here I am playing the part as Rabbit 🙂 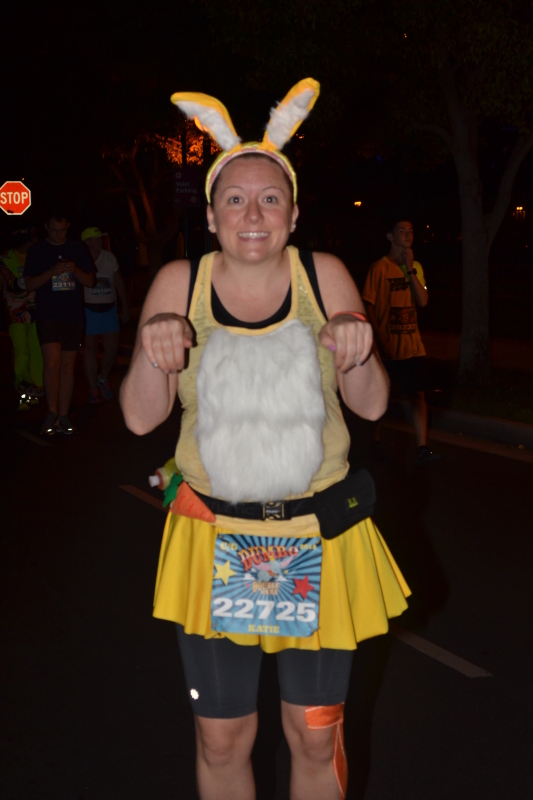 Anyways, I ended up being in Corral C for the 10k. It wasn’t terribly crowded when I first got there, but it quickly got tight. There were no fireworks at the starts of each corral like there are at the Disney World races, but they had lights and lasers. 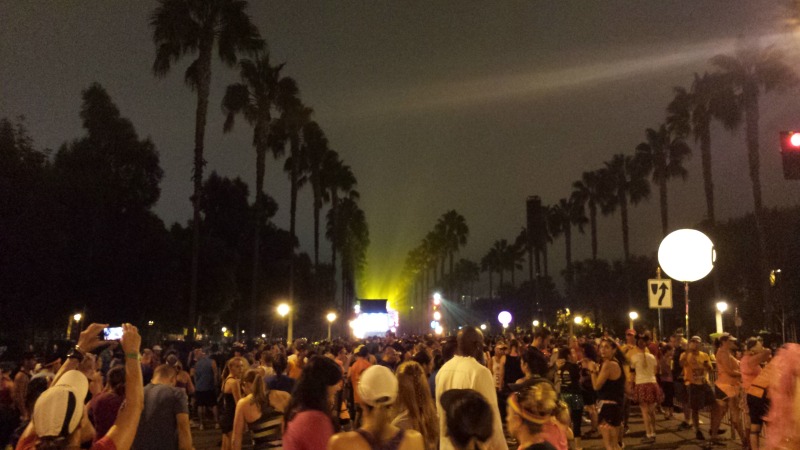 Soon it was time to start running! I had the intervals of Run 1:30, Walk :45 set up and followed it for the first mile or so until I got to the parks. (Well, I ended up running through the first few intervals because it was so crowded on the course that there was no room to walk…) The race started through Downtown Anaheim. It wasn’t terribly exciting except for the adrenaline of the race. I didn’t take any pictures of this part, except the blurry one below.  I DID, however, get to see a fellow facebook friend who recognized me and we had a nice chat while running through Anaheim and it really helped to pass the time. Hi Kim!!!! 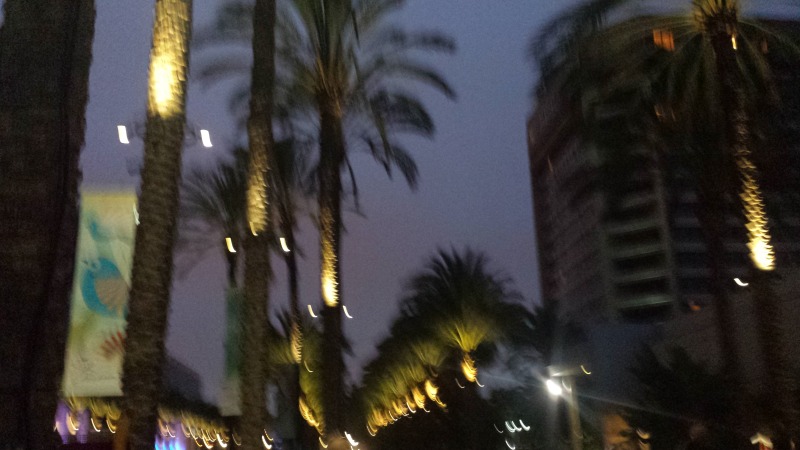 But finally we got to the fun part: running through California Adventure and Disneyland!!!!! Here are the mile markers for the 10k. I didn’t really want to always wait in line to take a picture, so I made do with quick stops and snapping selfies as best as I could. At this time I pretty much stopped following my intervals. There is something about running through the parks that is magical and I felt so alive and excited that I just ran from picture stop to picture stop. Not that I was super fast or anything, but the adrenaline really kept me going. 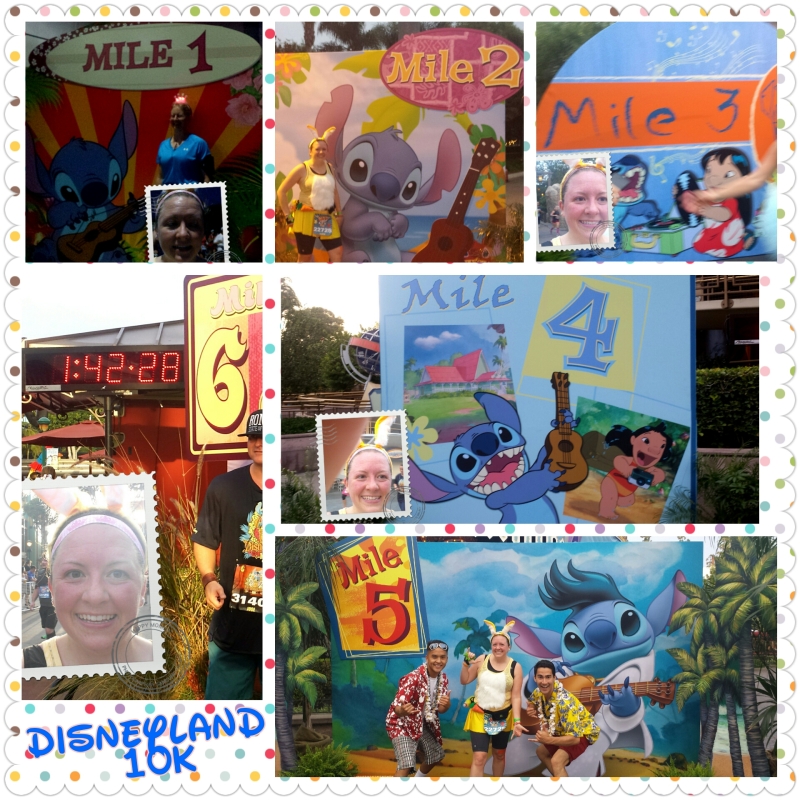 We got to run through Radiator Springs, which was pretty neat because there were a lot of good places to take pictures and it wasn’t terribly crowded to do so. 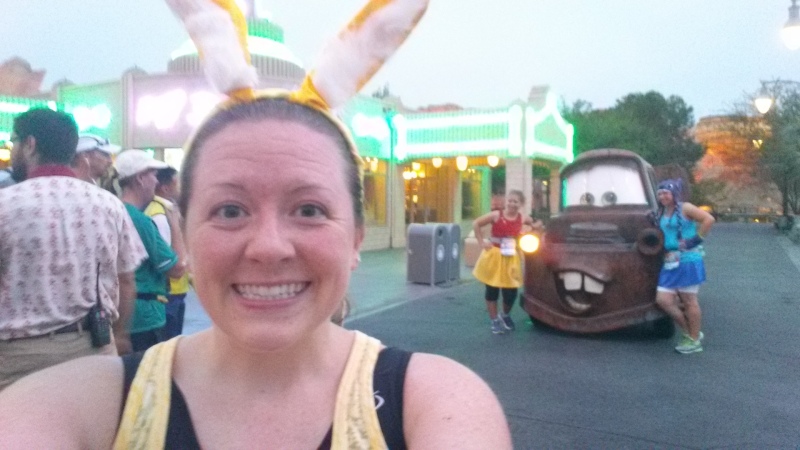 On to Paradise Pier! It was getting much lighter at this point, but it was still awesome to see all the rides lit up in the dawn light. Running towards this area was awesome, and the excitement was still building. 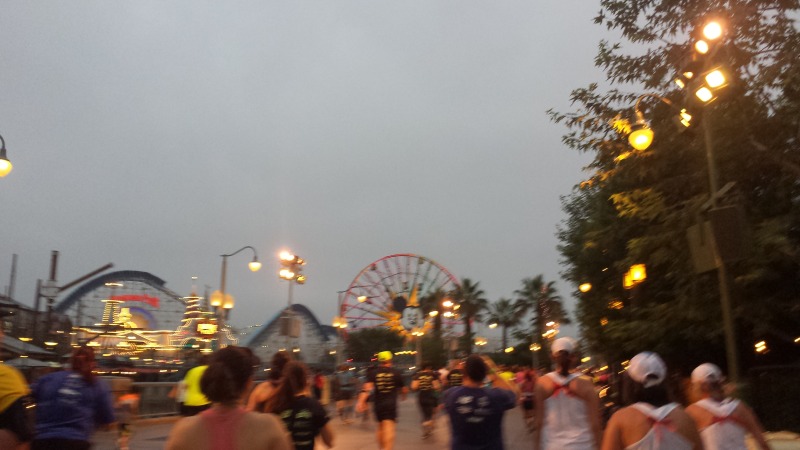 I got to meet up with Elvis for a quick picture before heading around the pier. It was surprising how Not Long the character lines were! I just had to stop! 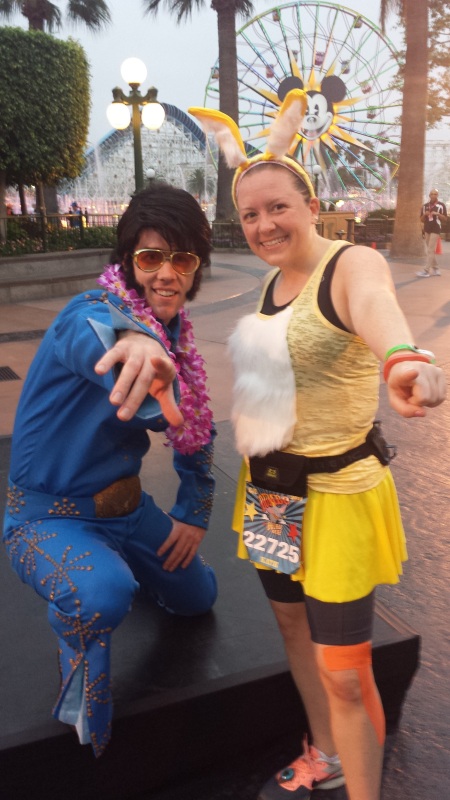 I loved seeing the colorful water as it sprayed up. It was almost like running through World of Color! I loved running around the pier! 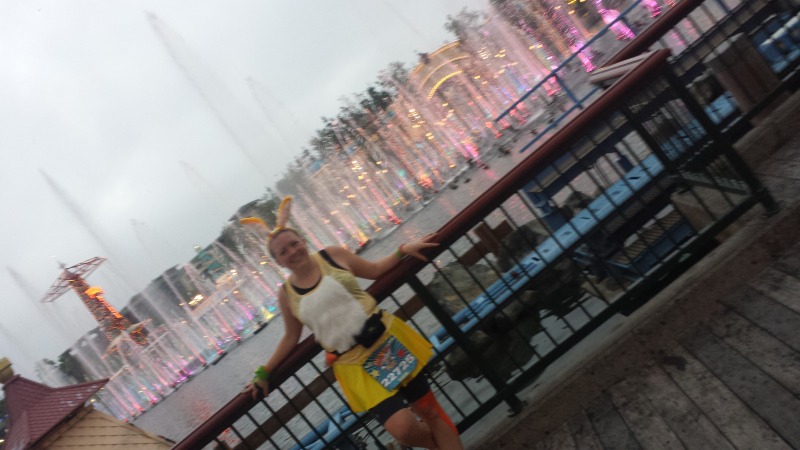 Next up was running through Disneyland, where we passed by the Matterhorn mountain. If you look closely you can see the black opening of the mountain. If you at the perfect angle you will see a hidden Mickey. Unfortunately, I did not snap the picture at the correct angle. 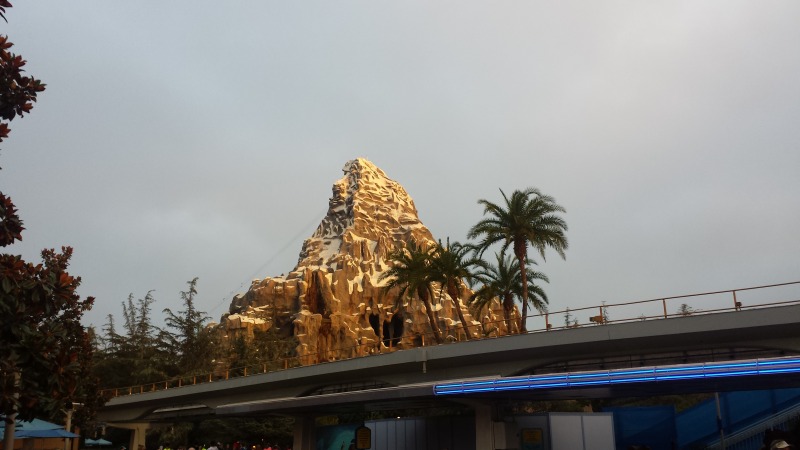 Moving on towards It’s a Small World. Thinking about it now, I should have probably stopped for this character visit because I have never seen them in these outfits. Oh well, at least I got a run-by picture! 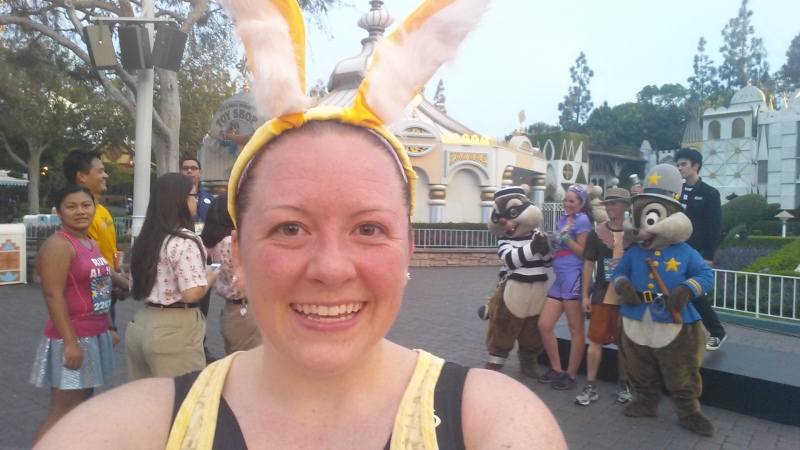 And here’s It’s a Small World 🙂 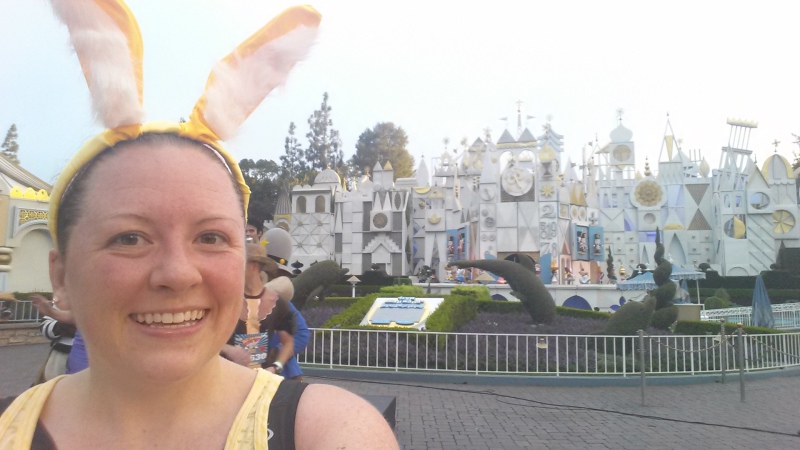 We ended up backstage and we passed the train staging area. It was neat seeing a bunch of the train cars in the warehouse building, but they had this engine out. I snuck a picture because I thought it was cool looking, not that it was really out for the runner’s viewing pleasure. 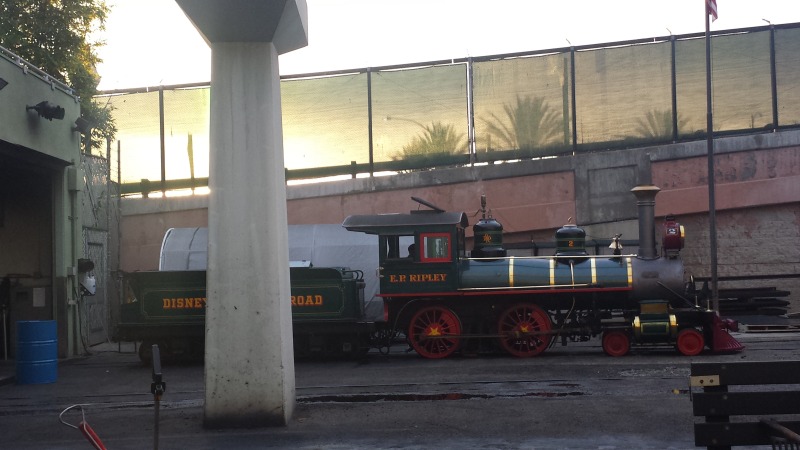 Still backstage, I saw this sign by the Performing Arts area. As a music teacher, it hit home (especially because school would be starting three days after this race). It applies to what I do everyday! 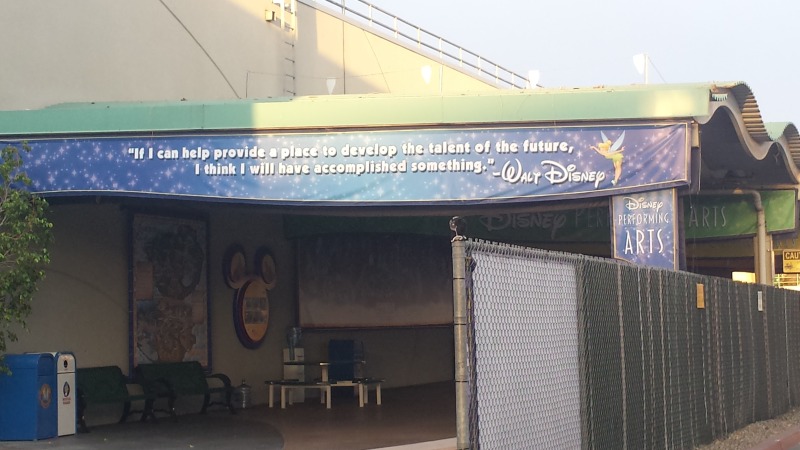 The next part of the course had some parade floats out for us to view. This part was awesome and I had a good time posing with the different themed floats. Here they had an Under the Sea float next to the Mickey Pumpkin which must have been just taken out of storage. 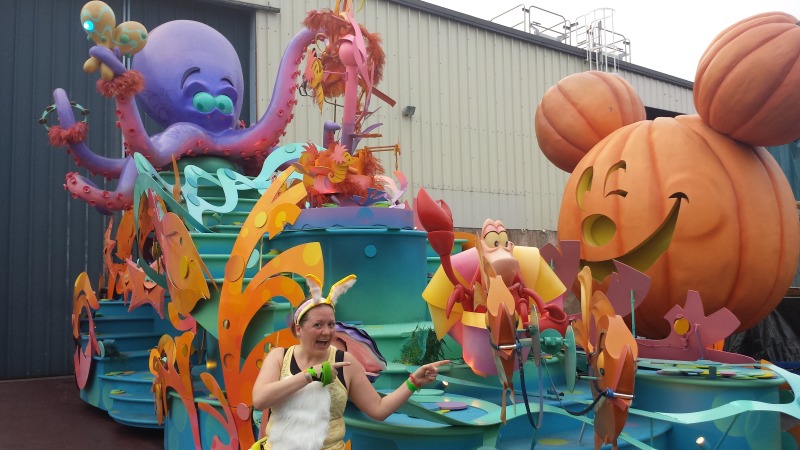 Around here is where I fell. I totally tripped off a curb. I didn’t even know I was ON a curb. I’m pretty sure I was looking at my phone or something when I fell.  I ended up twisting my ankle pretty bad and had to sit down for a minute. It was funny that I fell right near the medical tent, but I didn’t want any part of getting looked at. My ankle hurt for a minute, but then I got up and kept running and was fine. [NOTE: I ended up spraining my ankle pretty bad. It was super swollen and super sore later that day…] 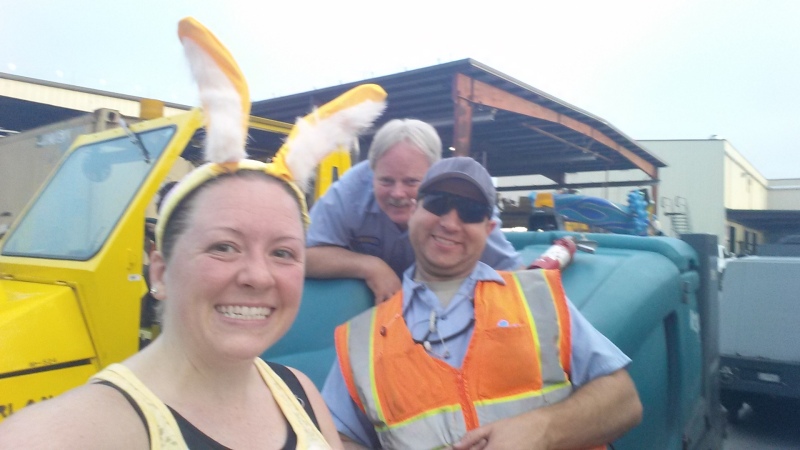 Posing with some more floats: 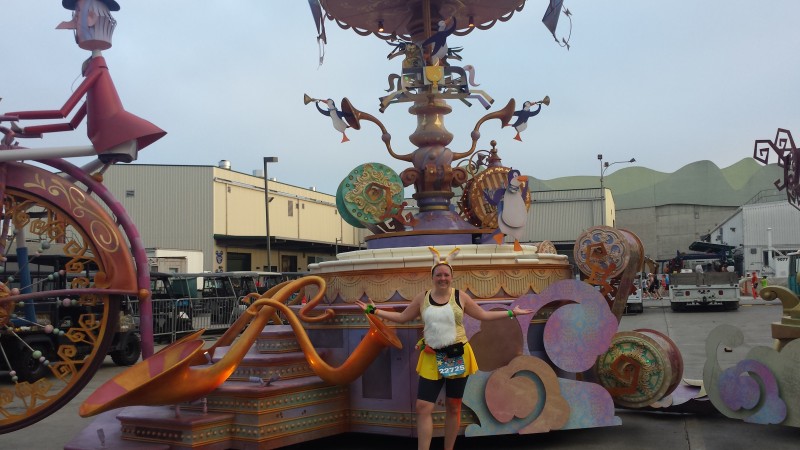 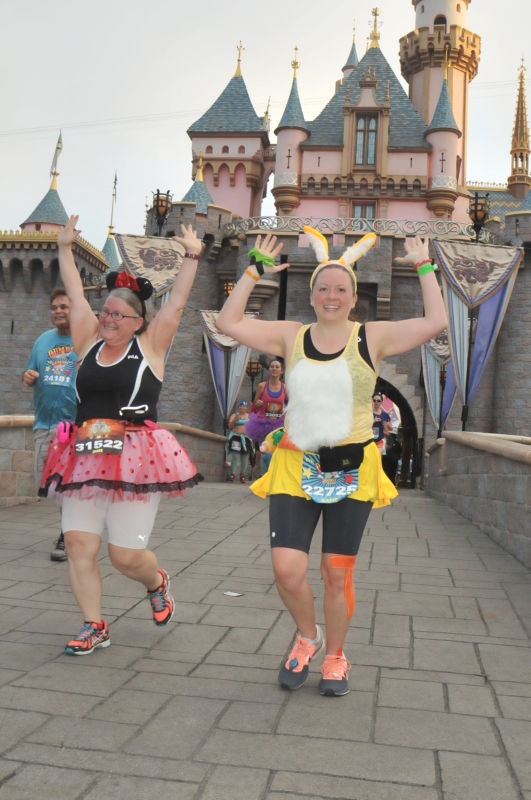 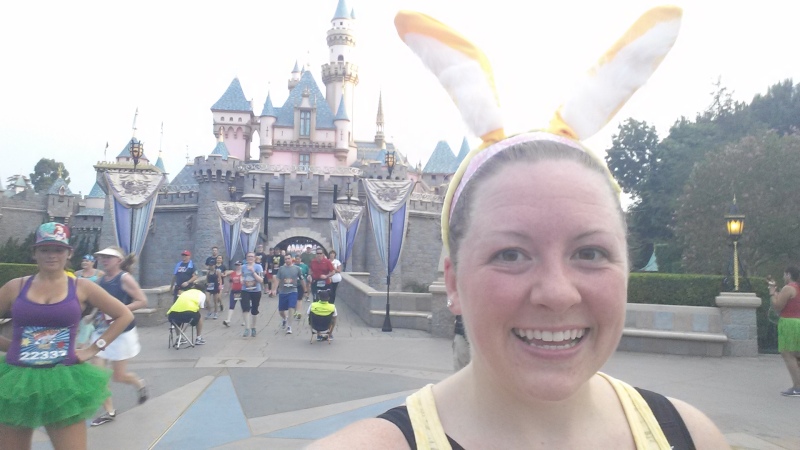 Ok! I think I am nearing the finish line now! I’m feeling good, despite a hurt ankle, but I’m ready to finish! 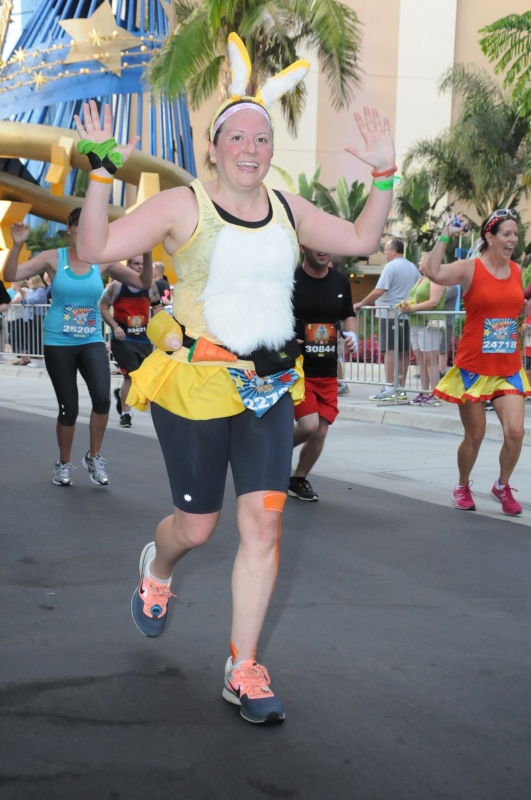 Here I go! High 5s to Mickey and Minnie! 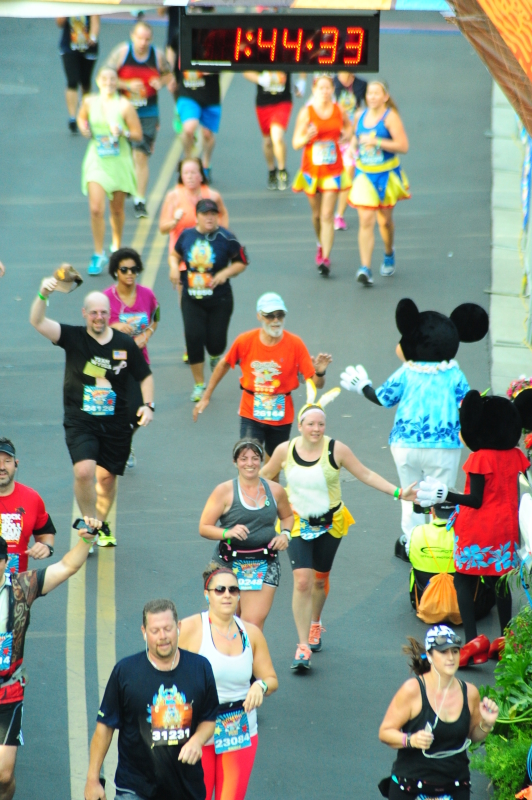 Woohoo! My official time is 1:29:59. Not terribly fast, but really not that slow for as many times as I stopped to take pictures and to shake out my hurt ankle. It was about a 14:25 pace. 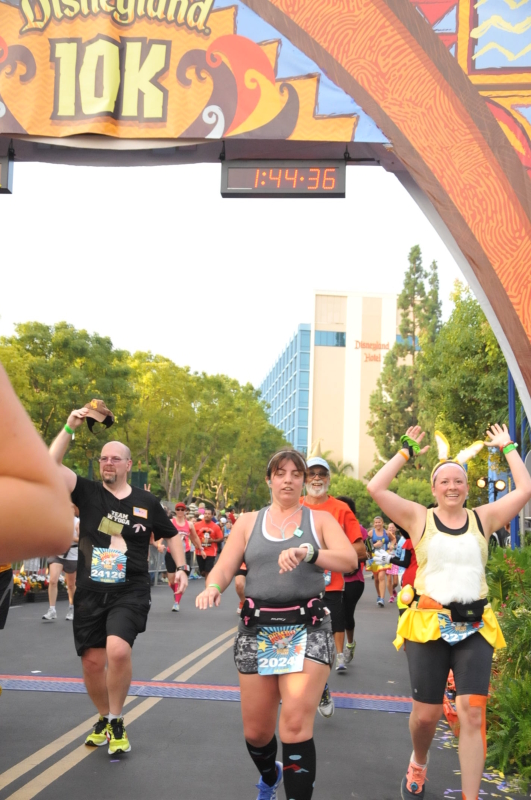 Here I am with my awesome medal. I really like this medal. I like how Stitch is a tiki! 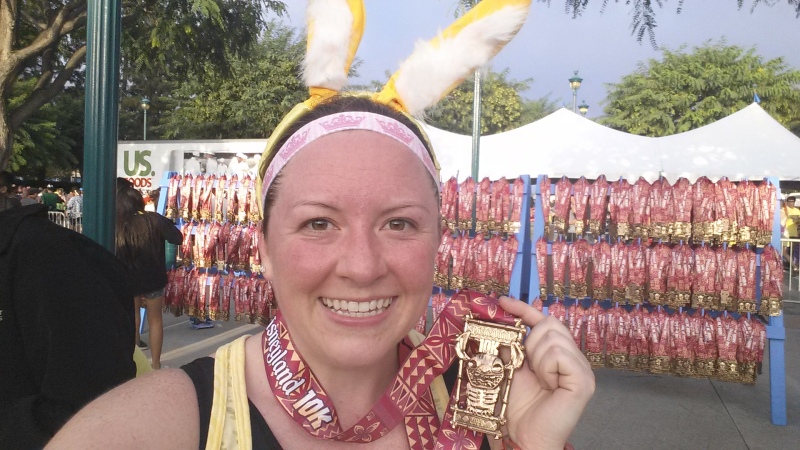 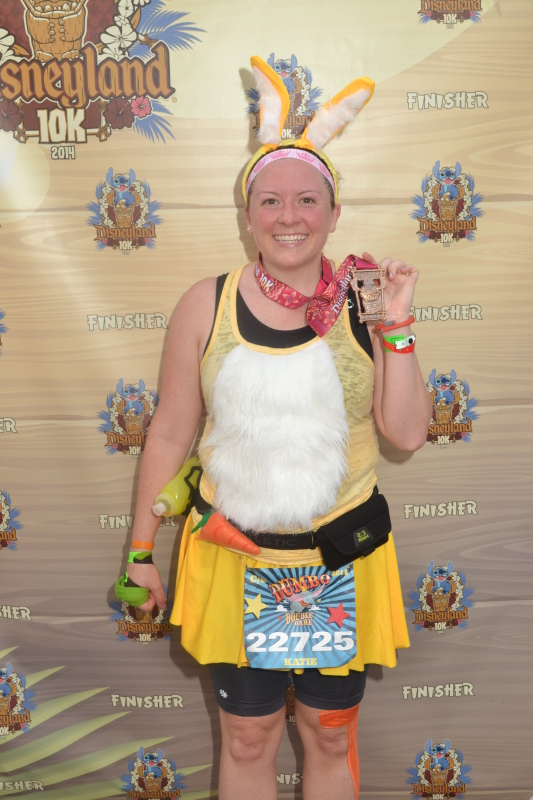 And here is some of us after we finished: Heidi, Marty, me, and my aunt Heather. 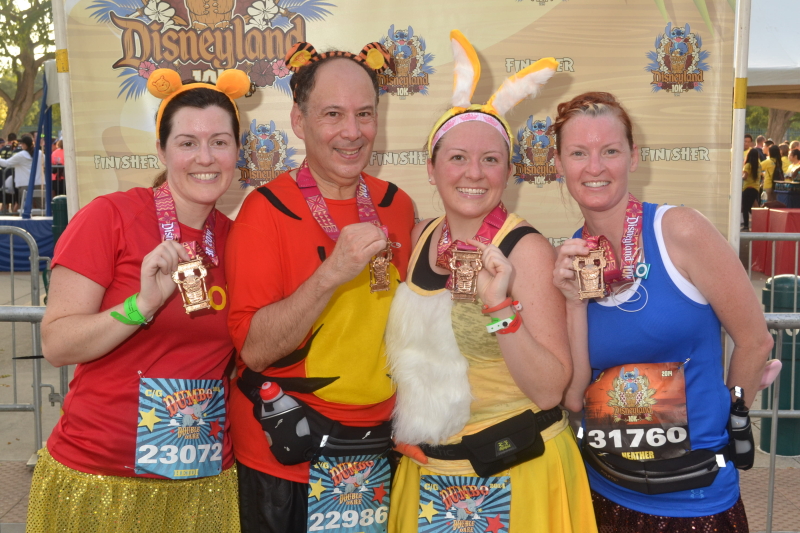 Yay! I had a great time running the Disneyland 10k!!! A lot of people were bummed that there weren’t a lot of characters on course, but I certainly always find places to take pictures! And I certainly enjoyed looking at the parade floats! What an awesome race! 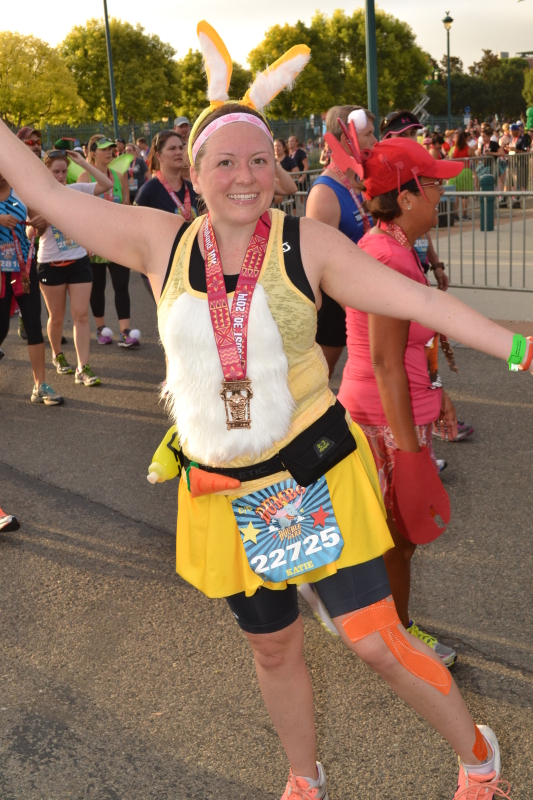 Here is the GPS map of my run! 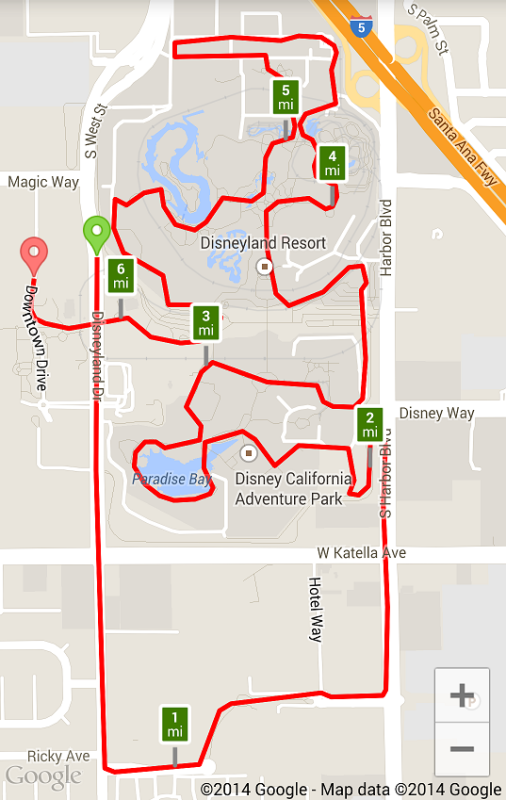