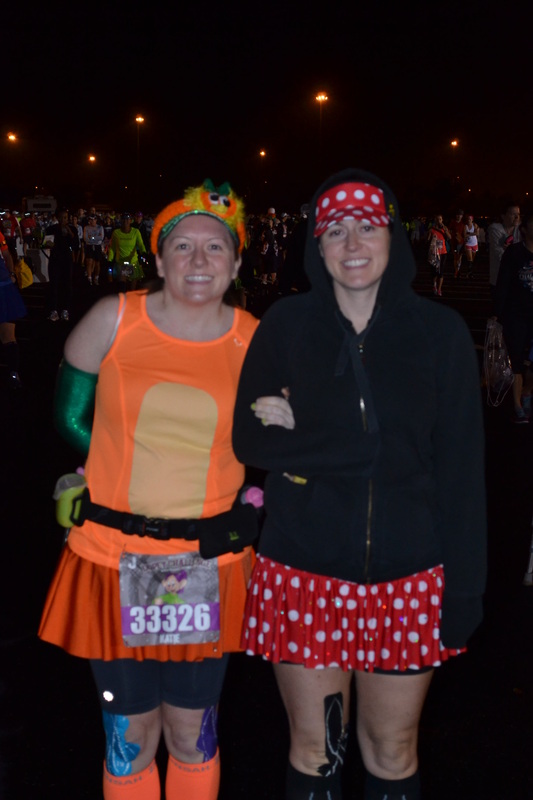 Me and my sister Heidi before the marathon.

Sunday morning (err…night…hmm…) brought my last 3am wakeup call for the Dopey Challenge. Heidi had crashed in my room the night before, so we would be ready to catch the bus. For the marathon, I was dressed as Orange Bird. A lot of people who aren’t Florida locals (or obsessed people who go do MK all the time), don’t know who Orange Bird is. The Orange Bird is a character created by Disney for the Florida Citrus Commission as a mascot and is a character at Magic Kingdom’s Adventureland at the Sunshine Tree Terrace located near the Enchanted Tiki Room. Heidi was Minnie Mouse-themed. 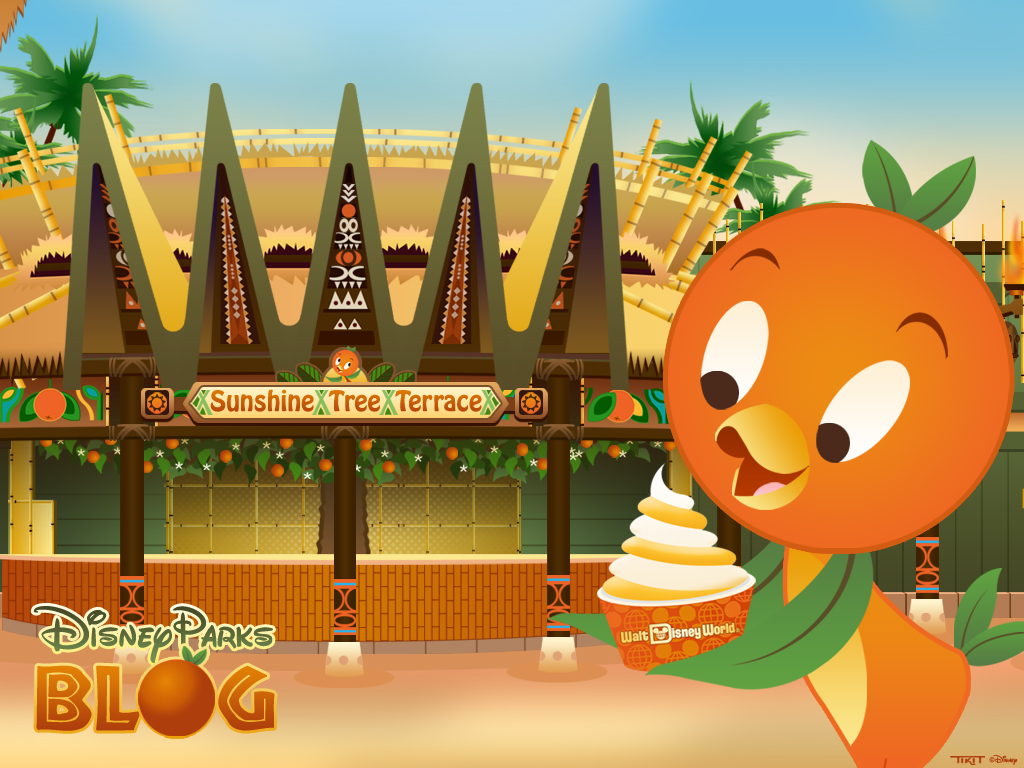 After running to the port-o-potties 10 billion times (stupid nerves!), Heidi and I made our way to our corrals. I was in Corral J; she was in M. Our plan was for me to start off slow until she caught up with me. I did just that, and we met up at mile 5, right before entering the Magic Kingdom. 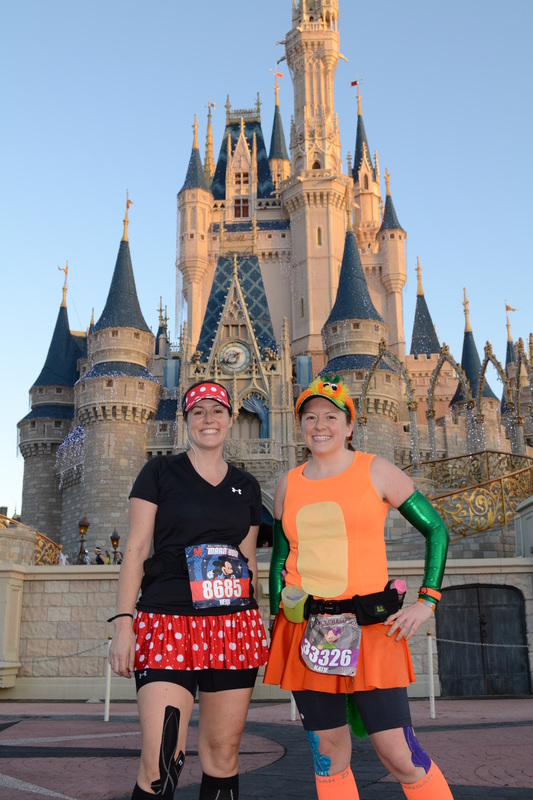 Running through the Magic Kingdom during the marathon was just as magical as during the half, except we didn’t stop for as many pictures. We did stop for the castle, though 🙂 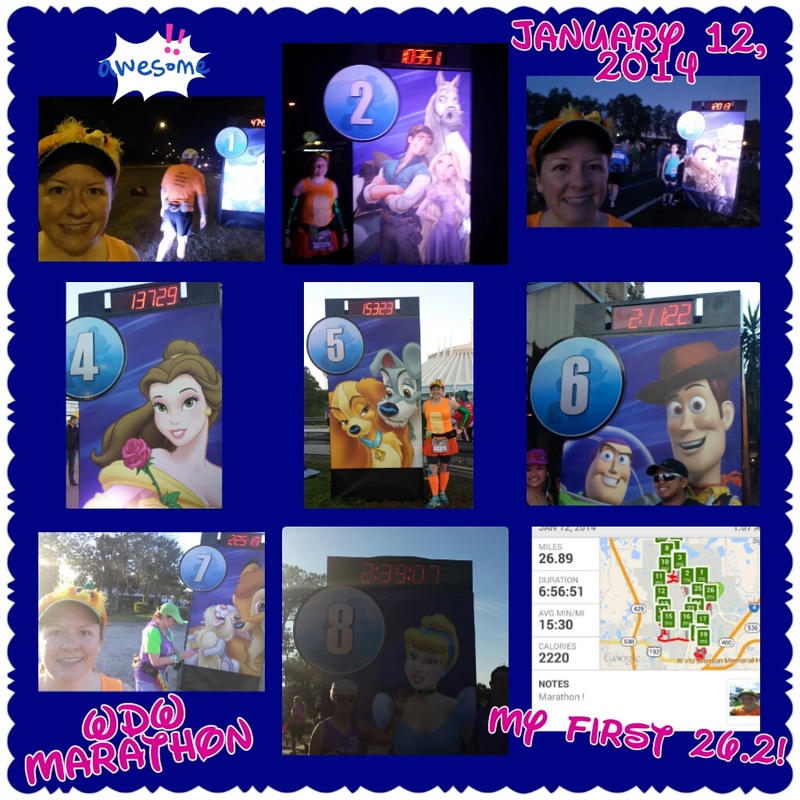 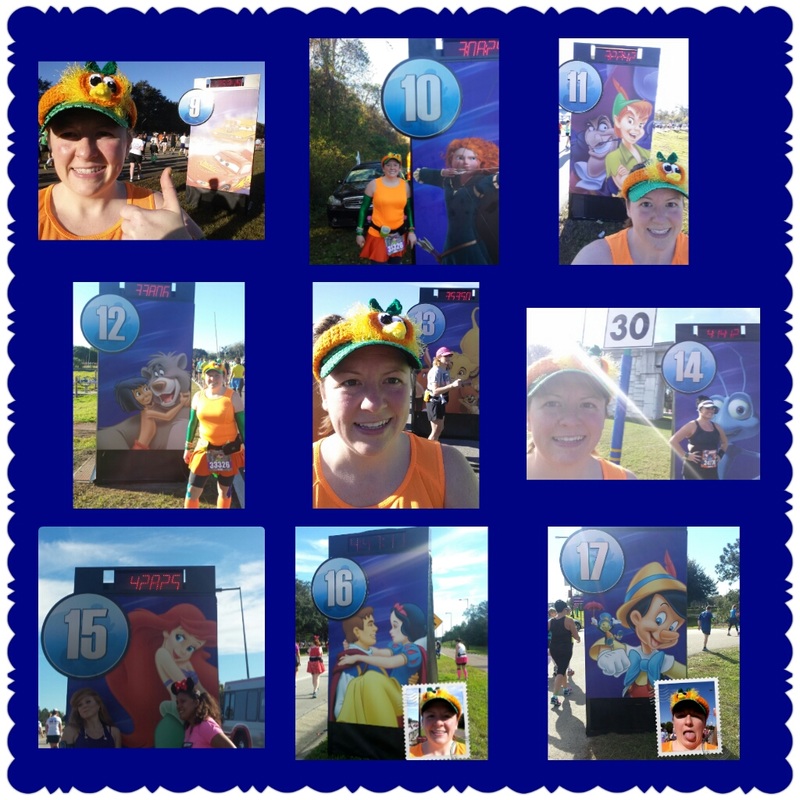 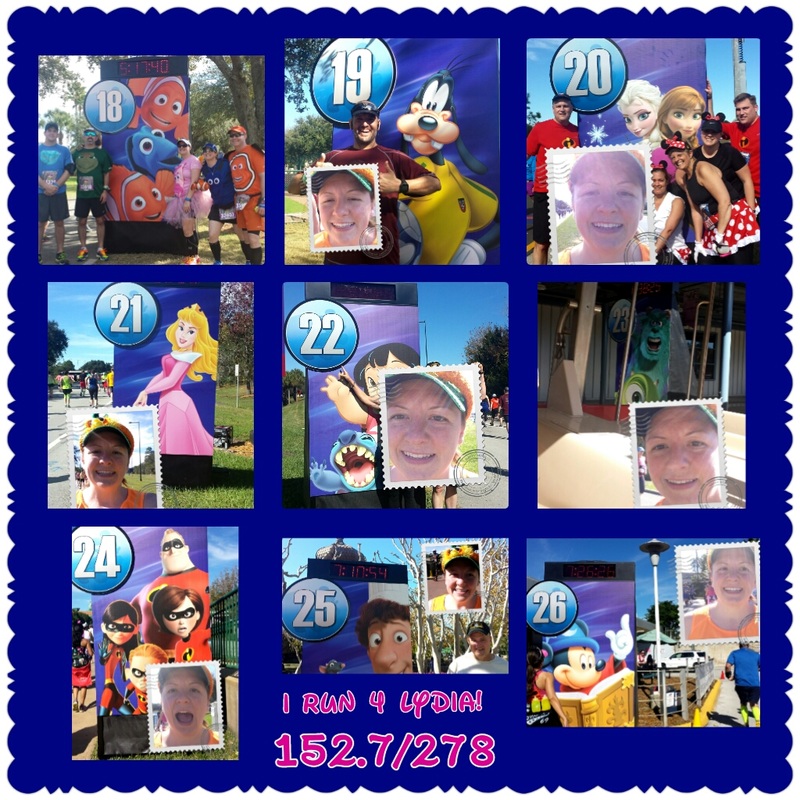 Once we got out of the Magic Kingdom, I lost track of Heidi. She was on a roll, and I just couldn’t keep up. The bottom of my feet hurt so much!!!The trek to Animal Kingdom was a bit long – through the speedway and past the sanitation plant…yuck, it smelled!But once at Animal Kingdom, my hopes picked up because all the character lines were short! Right outside the park they had some live animals – pigs, birds, etc. 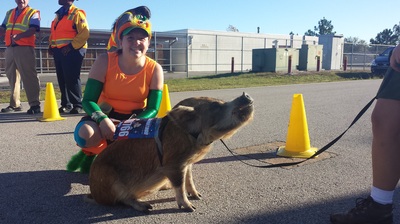 Hanging out with a pig 🙂 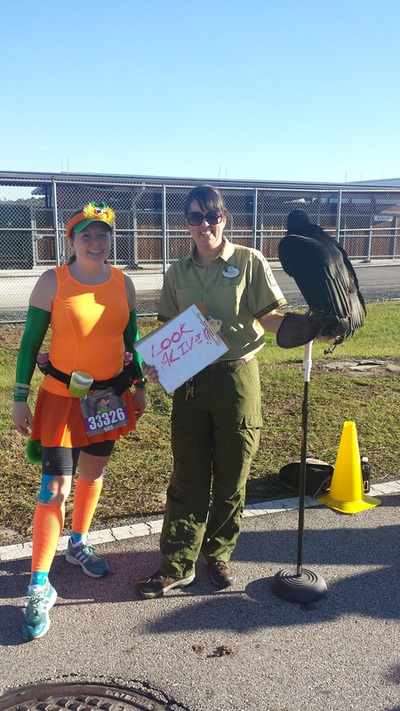 Some live animals to cheer us on!
Then came Rafiki. I love this picture so much! 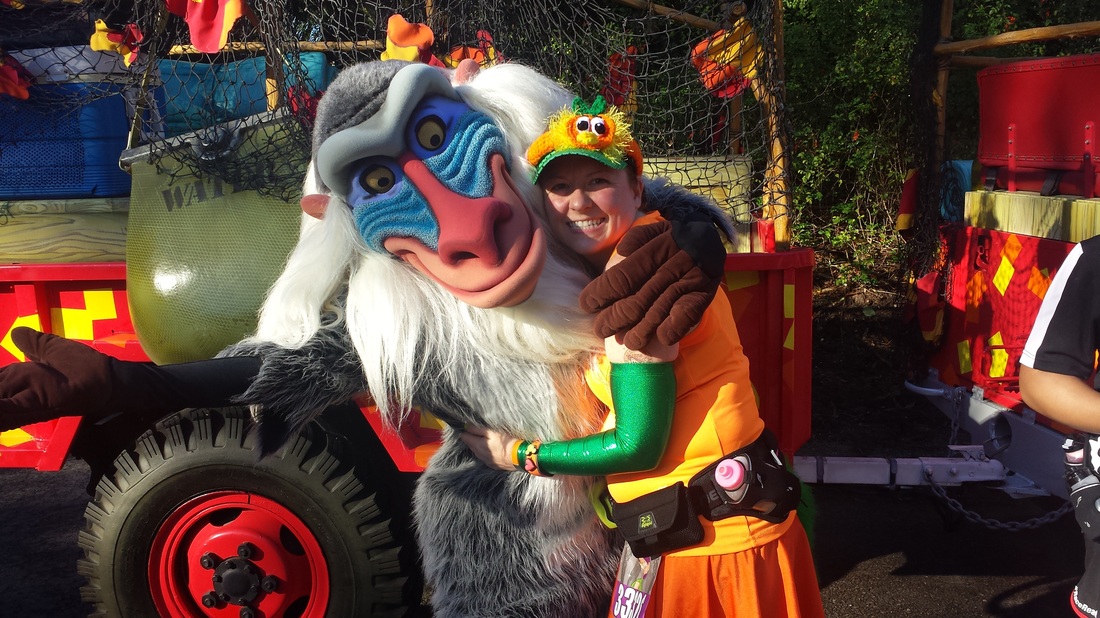 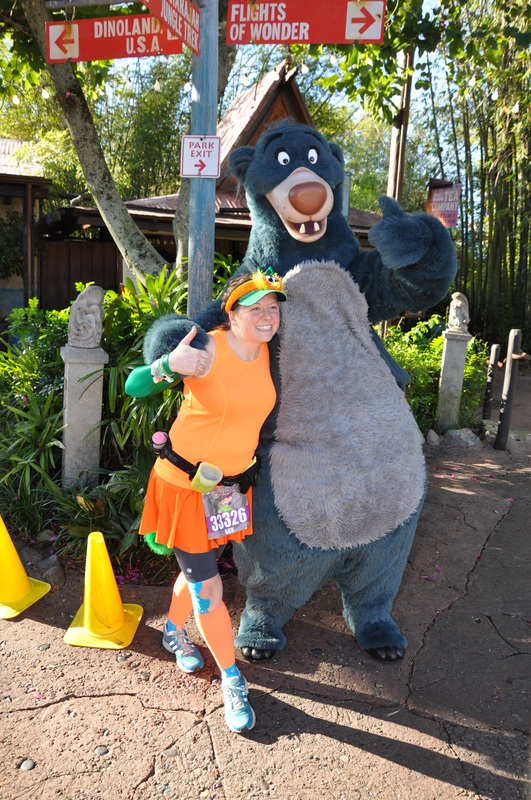 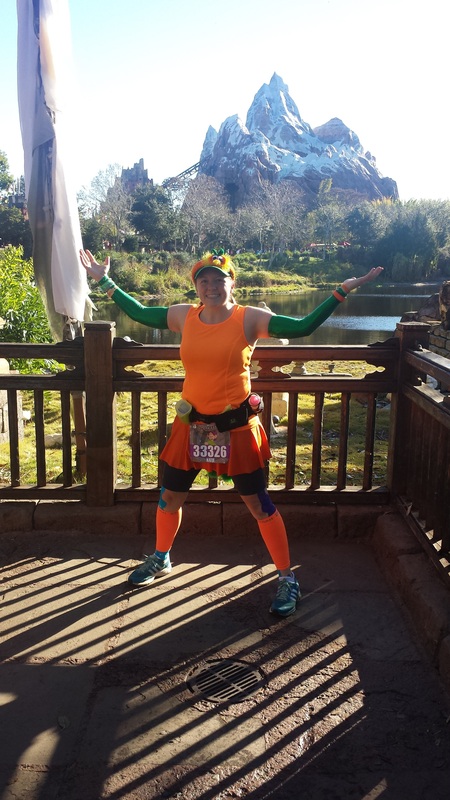 Expedition Everest. I didn’t think that I would have time to ride Everest, so I passed for the chance to be able to take more pictures. It was a good choice, though maybe one day I will be fast enough to actually ride it during the race… 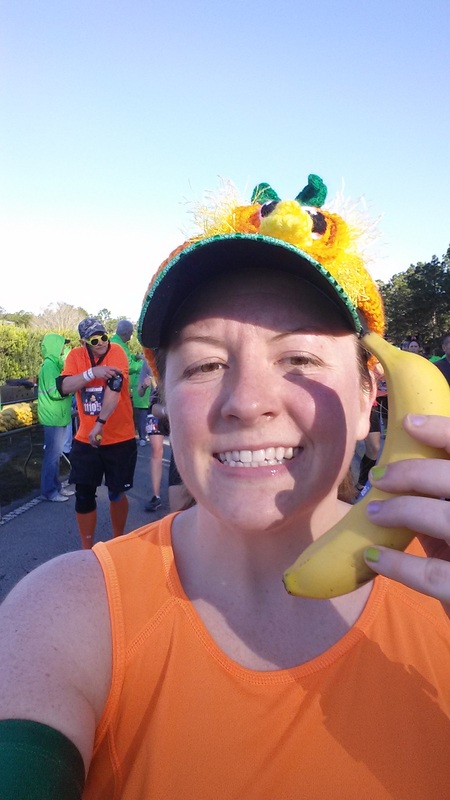 I loved the banana stop. It gave me enough energy to keep moving!I ended up having to stop at medical to cover my feet in Biofreeze. It felt good to take my shoes of momentarily, but I don’t think the freeze worked. My feet still hurt so much! I need to find a good pair of shoes…..And let me tell you, I hated running through Wide World of Sports during the marathon. It just felt like we were there FOREVER, just winding around field and field, and building….blah…Probably because it was towards the end and I knew that as soon as I was out of there, it would just be Hollywood and Epcot in my way before finishing. 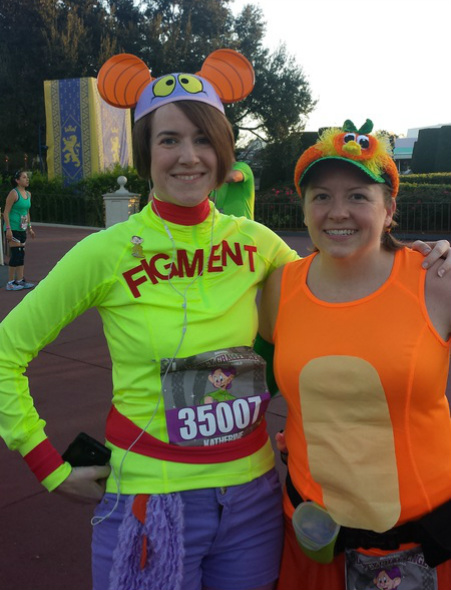 I found a Figment! 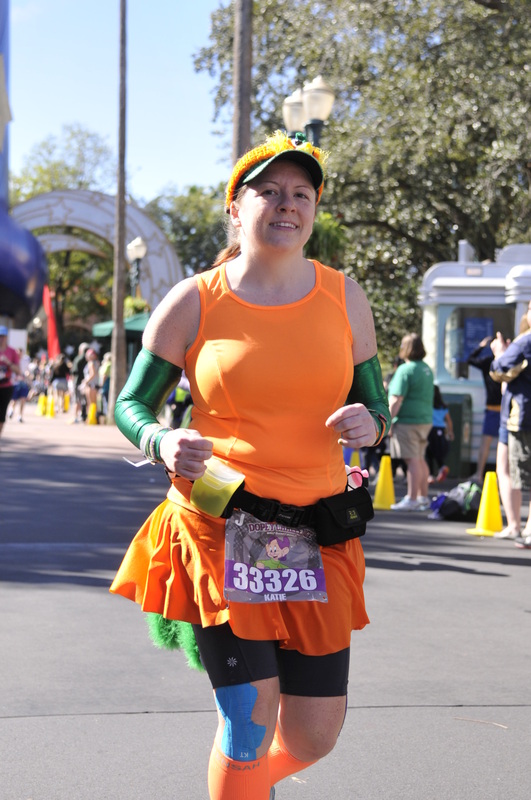 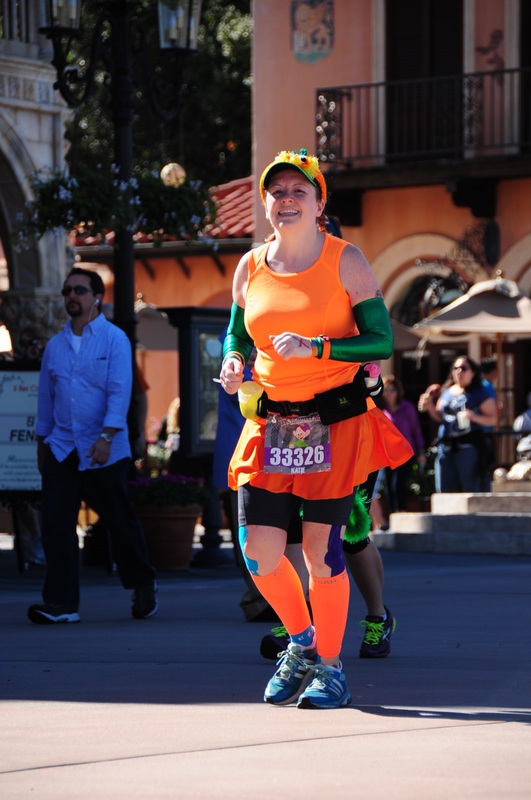 Running through Hollywood Studios. I was a little bummed that I didn’t see a photographer in front of the big hat. 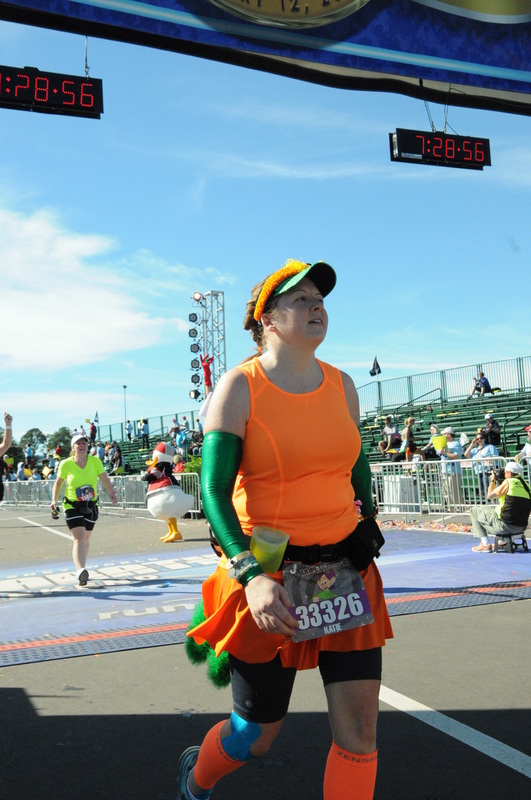 I look exhausted! Really, I just wanted to chop my feet off….
Finally, I finished. It was a slow, rough ending, but I made it over the finish line. Upright. In one piece. I was feeling good, except for my feet. 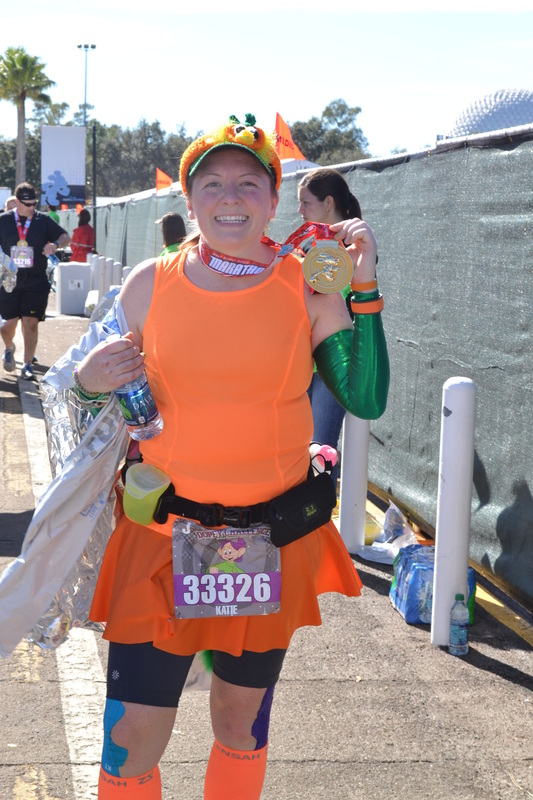 As soon as I got my medals, my shoes came off! I tumbled to the massage tent and got a 10-minute foot rub. It slightly helped, and I was able to collect my belongings from bag check and make it to find my husband. I then hobbled over to the engraving tent and got my marathon medal engraved with my time: 6:56:44. Not fast, not at all. BUT! It was under the required 16 minute pace! And that is all that matters! My total time of being Dopey is 12 hours, 37 minutes, 53 seconds!The Dopey Challenge was AWESOME!!! I would recommend it to everyone who is looking for a fun challenge. As long as you train for it, you will be able to do it. This was my first ever marathon!I met a lot of awesome people online in various Dopey/runDisney groups, as well as face-to-face at races and meetups. #wangnation #teamwang

My first marathon was a great experience, but now I think I might be spoiled…how fun can another marathon be without all the fun stops and pictures to take???!!!