Each year, the Marine Corps 10k and Marathon takes place in late October in Arlington, VA and Washington, D.C. This year’s race took place on Sunday, October 22, 2017. Previously, I ran the Marine Corps 10k back in 2015. I was supposed to run the marathon in 2016, but had to transfer my bib due to a pregnancy. This year I signed up again for the 10k, along with my dad and his friend. It’s always good to attend this event as it shows support for our Marine Corps. They have to be organized and physically fit, which is what this marathon is all about. It was so lovely to see people in the crowd with marine corp flags. That just shows how much people do respect the work that the Marine Corps do. 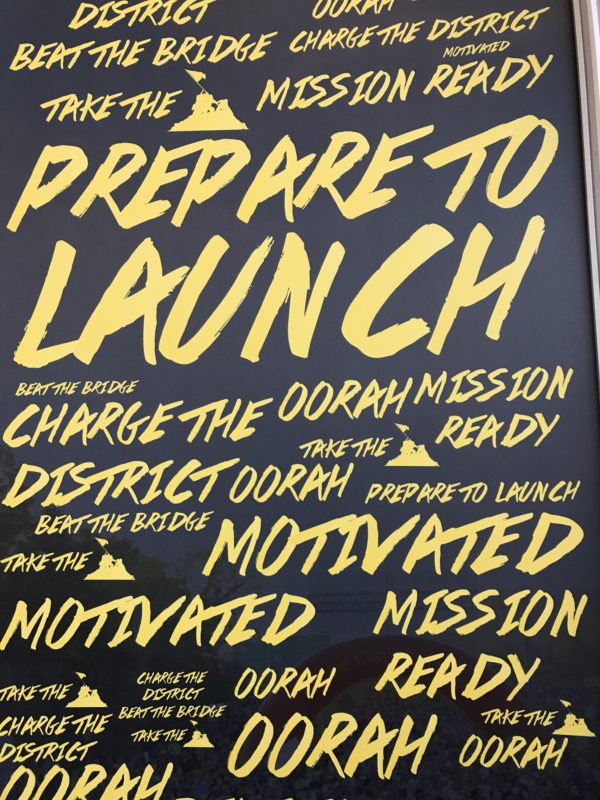 The expo was held at the National Harbor Gaylord on the Friday and Saturday before the race. Since traffic is atrocious on the weekday evenings, I decided to attend on mid-morning Saturday. Traffic wasn’t too terrible to get to National Harbor, and we found a parking spot in one of the parking garages.

The expo was CROWDED! There were so many people (as expected), so it was a little hard to move around. I easily picked up my bib and shirt and went to see what was exciting at the expo. There were a lot of booths with both local and national companies. I walked around the booths and stopped for a photostop with Mixolydian. 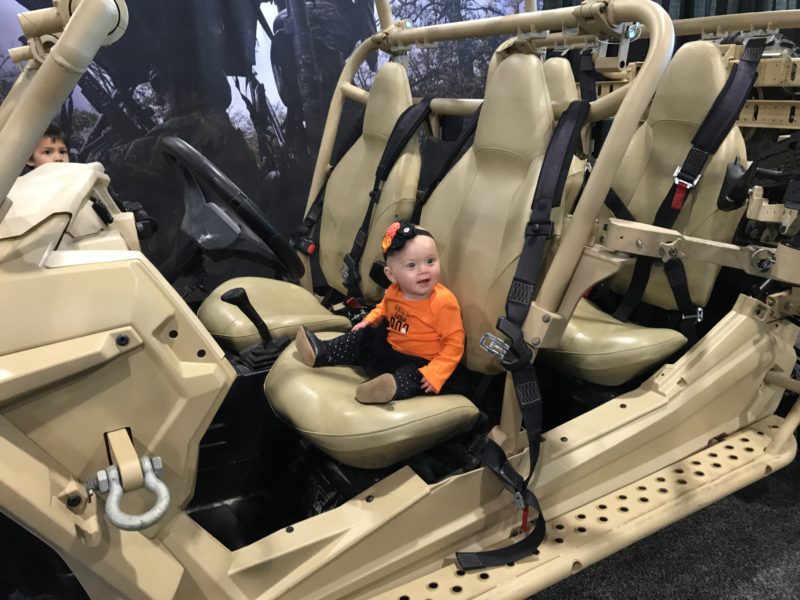 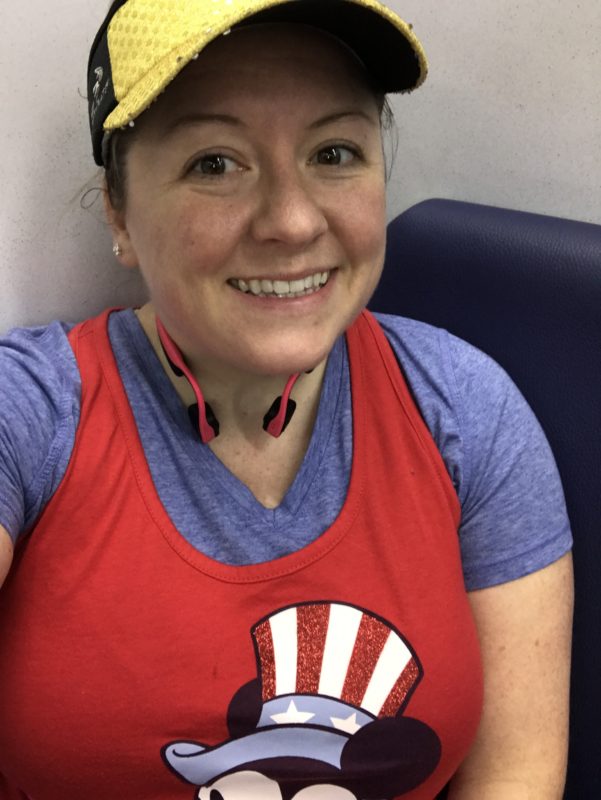 We parked at the Huntington Metro and rode to the Navy Archives stop. From there, it was a short walk to the 10k start line. The security check was really quick, and we had plenty of time to enjoy the sunrise and wait in line for the port-o-potties. 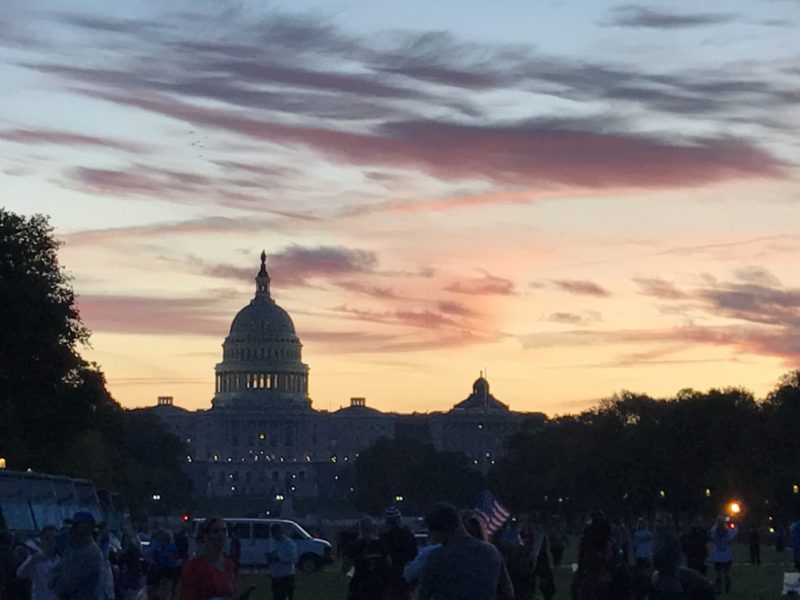 The corrals were self seeded and also very crowded. There was a few minute delay to the start of the race, but we finally got running. 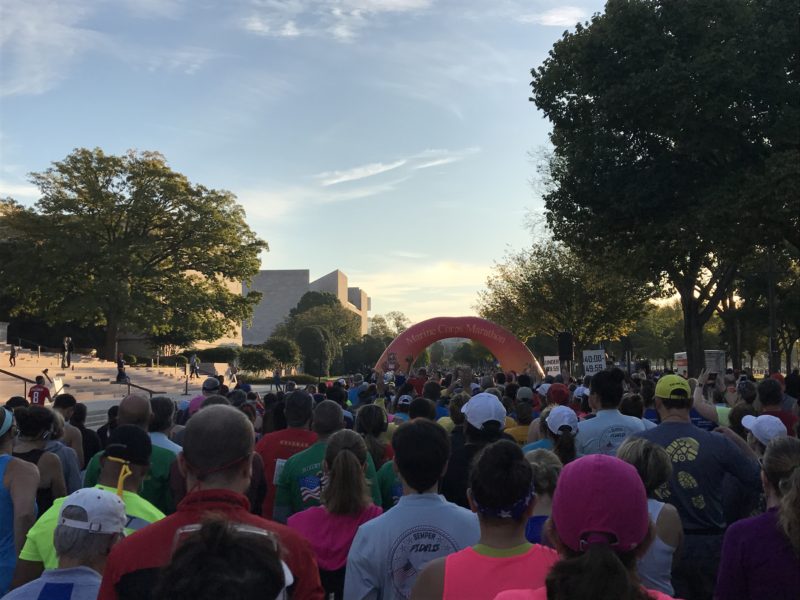 Surprisingly I did not take any pictures while running the race. What was I thinking?! And, unfortunately, none of the MarathonFoto pictures of me were any good.

The 10k course takes you briefly down Jefferson Street before going on the 14th Street Bridge. You then do a loop around Crystal City before running past the Pentagon (on the same road as the Clarendon Day Run) and ending at the Marine Corps War Memorial. Most of the the course is on the highway, but you can get some good views of DC and the Potomac River. I was so distracted with running, I missed a lot of the scenery 🙁

Towards the end of the race it was starting to get hot, and there was no shade. I felt really bad for the marathoners, though I know the 2016 race was much warmer. 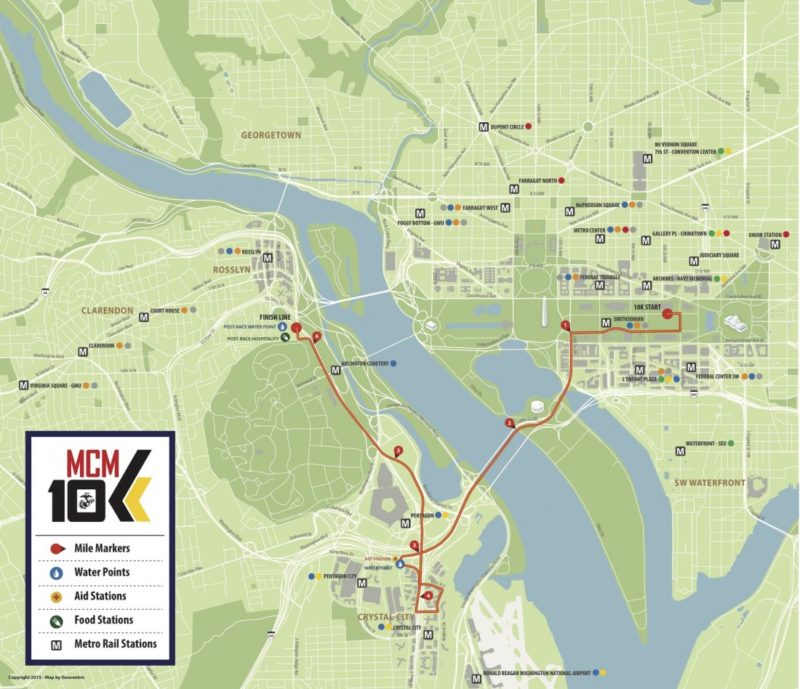 After running up the hill to the finish line, you are greeted by a row of Marines congratulating you on a run well done! 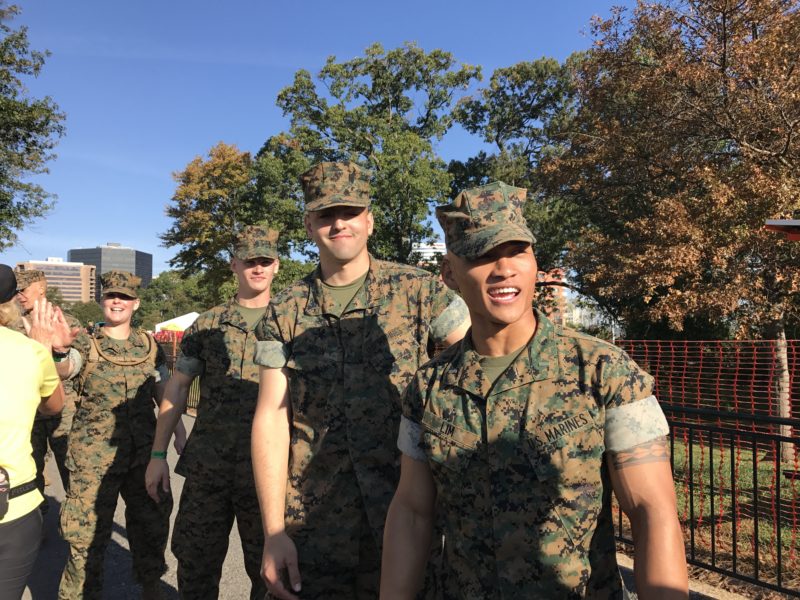 There were a few photo spots, but since the memorial was covered with scaffolding, I didn’t get a picture with it and just visited the backdrop that was set up. 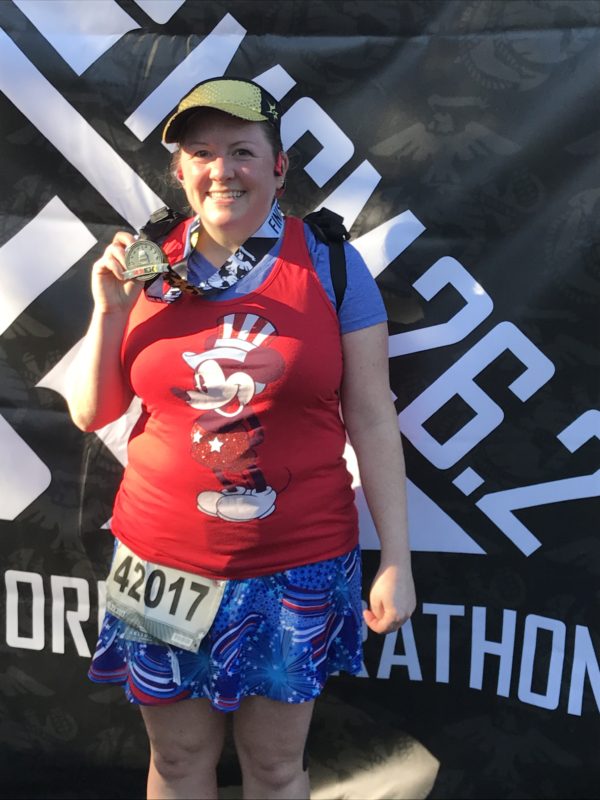 Before you made your way out of the secured runners area, you were able to pick up your water, Gatorade, snack box, and finishers recovery jacket. Then you were back in the “general population” and there were a lot of booths set up with different products. There was free watermelon, full-size Naked Juice, SportsBeans, and shots of Whiskey! 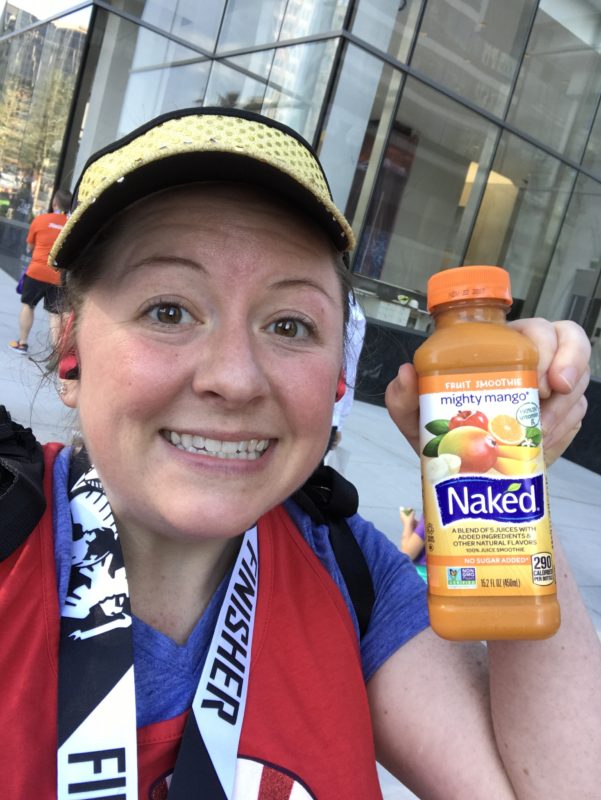 We were set up to do the intervals run 80 – walk 40. We kept to these intervals the entire race. Unfortunately, my foot was giving me major problems. I wanted to slow down, but no one wanted me to leave behind, so I sucked it up. My time ended up to be a post-baby 10k PR, so I guess it is a good thing I kept going. My time ended up being 1:23:26, with an overall pace of 13:10. 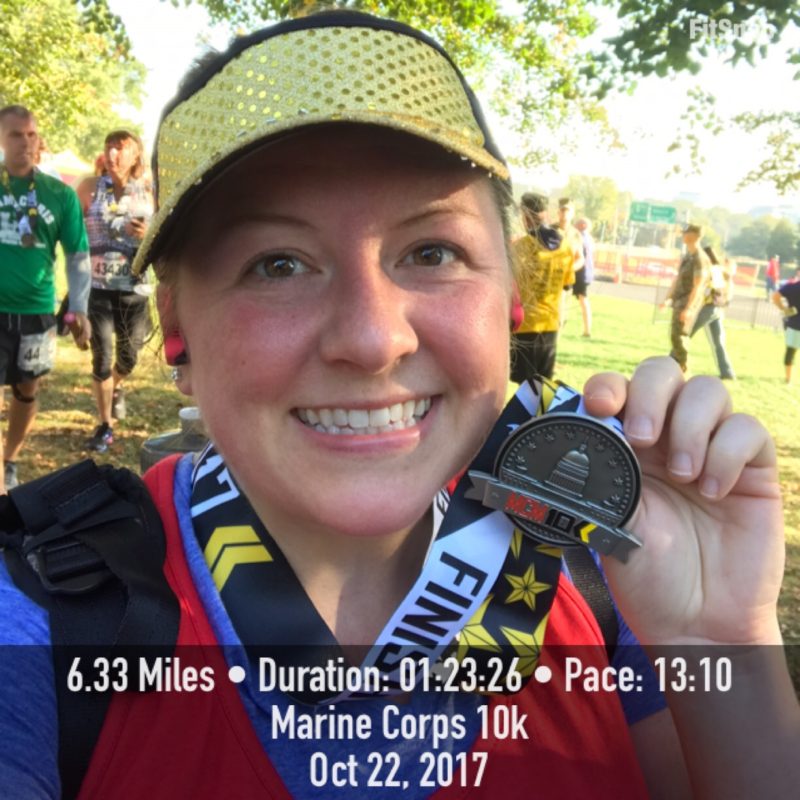 All the swag I got from the race: 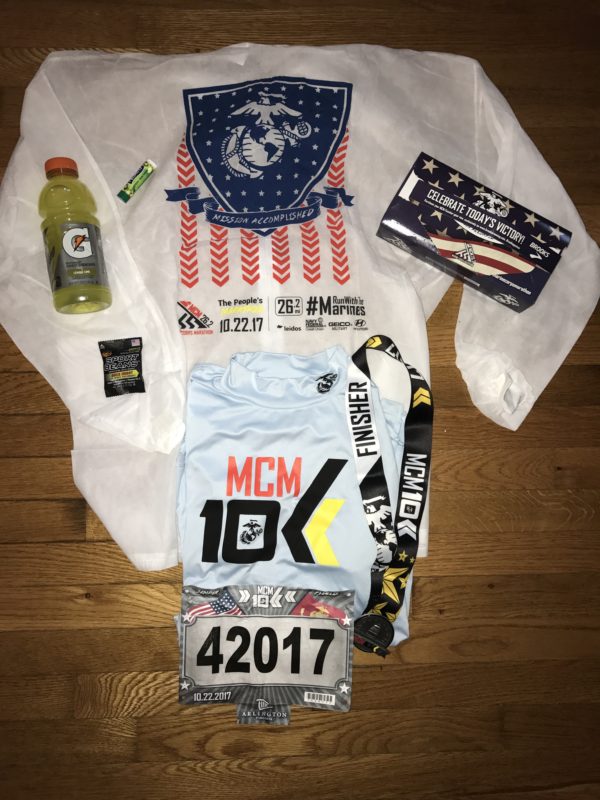