As reviewed by Tim Gunn 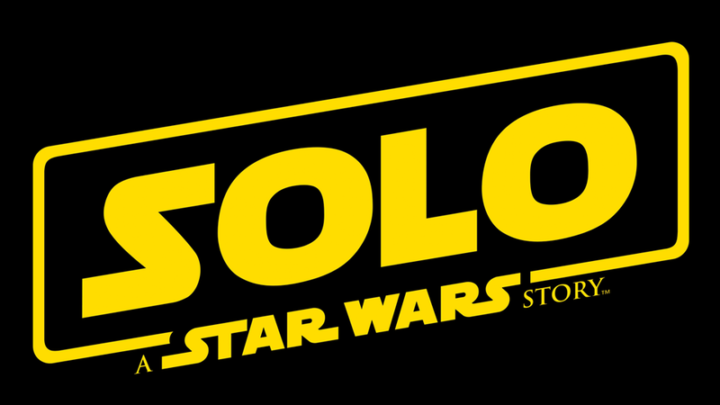 In the 1990s, Lucasfilm attempted to tell the story of a young Indiana Jones on television over the course of several seasons. The Young Indiana Jones Chronicles starred Sean Patrick Flannery, who no one would confuse for a younger Harrison Ford. This wasn’t a major issue for the fans because at the time television shows released on smaller networks outside of prime-time were not taken as seriously as they are today. I enjoyed watching most of that show’s episodes, and was glad Lucasfilm decided to make the series. It certainly did nothing to harm my enjoyment of the first three movies. Let’s face it, the stakes were pretty low. When a movie fails, that’s a big deal, even today. When a television show fails, or gets cancelled, sometimes there is an uproar, as we saw recently with Brooklyn Nine-Nine, but there is no universal sense of shock nor disillusionment.

A few years back, J. J. Abrams successfully (in my opinion) re-booted the original Star Trek cast, taking the story back to a time prior to the events of the 1960s television series. He nailed the casting, and the movie revitalized a franchise that had less ups and more downs during the Next Generation of films. Abrams also “revitalized” the Star Wars franchise two years ago by creating a sequel to the beloved original trilogy of films that cast young winning actors for new roles while sliding in the original cast, including Harrison Ford, returning as the legendary smuggler and galaxy-saving wingman Han Solo. To Abrams’s credit, the director managed something Spielberg struggled to do with the fourth Indiana Jones movie: he got Harrison Ford to be Han Solo one more time. When you see Harrison Ford in the Force Awakens, you believe Han Solo is back. The movie felt like a return to form for a franchise that had been left somewhat in a state of limbo after Revenge of the Sith back in 2005.

The Star Wars franchise has been one big roller coaster ride ever since. First up was Rogue One, which fans were concerned about months before release due to internal drama over the direction of the film. Rogue One turned out to be a pretty good film that made an agreeably satisfying amount of money at the box office to justify Disney making more non-episodic Star Wars movies. This past winter, The Last Jedi arrived to substantial critical fanfare (including this reviewer – it’s in my top 3 all time of Star Wars films now), yet may have fallen short somewhat of achieving implicit financial goals due to unanticipated backlash from several corners of the Star Wars fan base and the average film-goer alike. 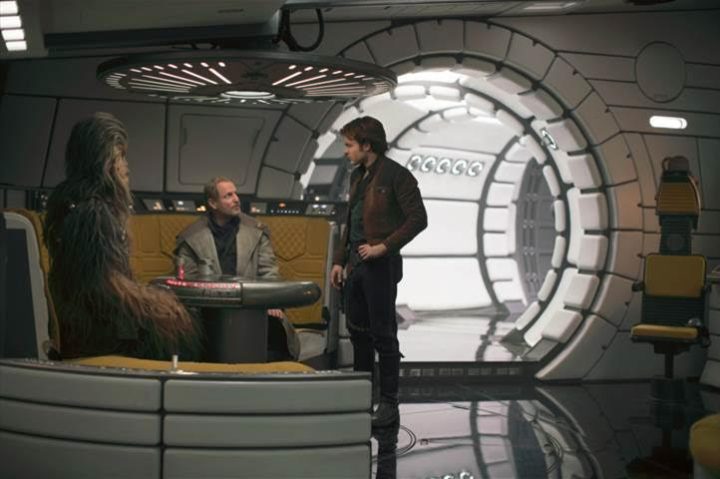 Now, just six months later, Disney/Lucasfilm is about to release a non-episodic, standalone film about a young Han Solo for Memorial Day weekend. Starring all new actors as the legendary characters from the original trilogy, the film seems to have two external ambitions:

1) to determine how fervent the market is for new Star Wars films outside of the December Holiday release window; and 2) to see how successfully original trilogy characters can be re-cast and have their stories continued in the galaxy far, far away. As for the first goal, we shall see in the coming weeks how this risk will pay off in ticket sales. As for the second goal, in my opinion, Lucasfilm is off to a tough start.

Solo: A Star Wars Story, like Rogue One, had some notable production trouble. The original directors were fired during the original shoot of the film and replaced by Ron Howard. Rumors have swirled that the majority of the film was re-shot, doubling the cost of the production. The biggest rumors, however, described troubling (for the die-hard fans) depictions of the actor, Alden Ehrenreich, requiring an acting coach for the titular role of Han Solo. The first trailers arrived rather late (by industry standards) during the Super Bowl. More recently, to make up for this, it appears that the airwaves are being flooded daily by new Solo advertisements, trailers, behind-the-scenes videos, and talk show appearances.

None of that matters to me, though.You can cut a great trailer for a bad movie, or the opposite as well. I know that some of the most troubled productions ended up resulting in some of the greatest films of all time, for example as was the case with The Godfather. I went into Solo open-minded. Sure, I had my trepidations, but I was ready to fall in love with this movie, embrace the new cast, and get ready to enjoy over and over a new Star Wars film. 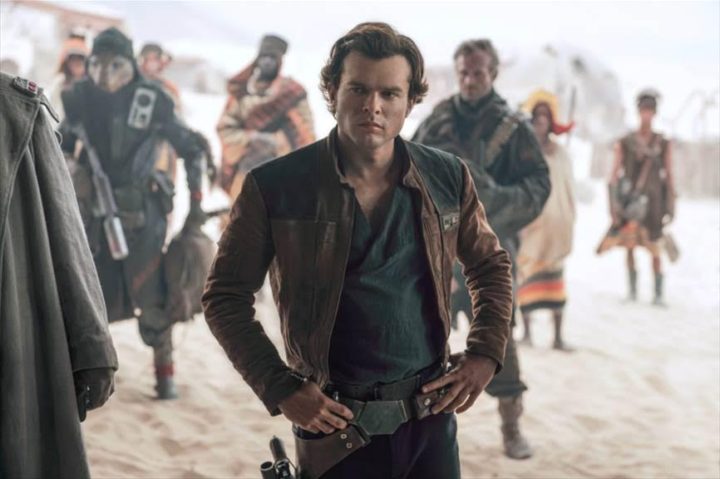 I did not fall in love with this movie.

And I really, really wanted to!

I didn’t hate the movie. It’s not a disaster. Not really. There’s nothing as galvanizingly dispiriting as (pick your choice of dialogue by Jar Jar Binks). Ehrenreich turns in a lovely performance as Han Solo. Sure, it’s different than Harrison Ford, but he is a talented actor and for most of the running time I could hang with it. Glover is perfect as Lando Calrissian. I thought Emilia Clarke was surprisingly effective and nuanced in her role as the love-interest / femme fatale. Chewbacca, one of my favorite side characters, gets more to do here than is typical for a Star Wars movie, and the portrayal is fantastic. I have watched the career of Bradford Young, the Director of Photography, with great interest in movies like Arrival and A Most Violent Year. His work is delicate and hauntingly beautiful in this film.

It’s a solid film, I think, for the typical moviegoer. I might even go out on a limb and say that for many this may be the first film they will have enjoyed from the Sequel Era (from 2015 forward). There are laughs, much of the action and plot is compelling, and there are lovely little grace notes here and there that add depth to the backstories of beloved characters and moments from other movies in the canon.

The trouble is, I didn’t love the film. And I wanted to love it. And I think I could have loved it, but it ends up legging out a double and comes nowhere close to being a home run. First up on my list of concerns is the musical score. It’s a complete dud. I have enjoyed John Powell’s work in other films, such as How to Train Your Dragon. He’s out of his league here. I am not sure why they couldn’t have brought back Michael Giacchino, but this score fails the movie. There are several scenes that should have been more memorable and thrilling than they turned out to be. And in each case, the score, in my opinion, is what fails these scenes. 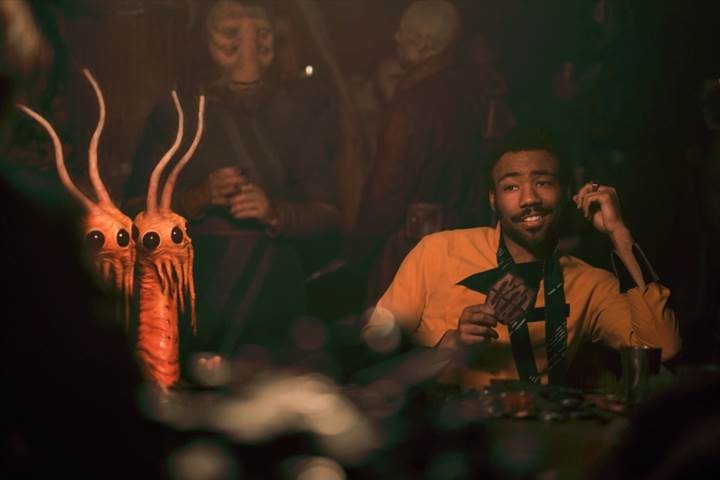 Next up for the firing squad is the lack, for whatever reason, of those iconic moments of spectacle and conflict that define a Star Wars movie. In Empire, the list is large. The attack on Hoth (thrilling), the asteroid chase (DOPE!), Yoda lifting an X-Wing out of the Dagobah marshes (goosebumps! Every time!), that kiss between the princess and the scoundrel (swoon), the big reveal (“No! I am your father!” OMG!!!). Even in a movie like Rogue One you have the Death Star blowing up a city, an absentee father repenting to his daughter, one of the more thrilling space battles of the series above the beachside planet of Scarif, heroic endings for the rebels, Darth Vader briefly and memorably wrecking shop, and then the mind-blowing connection that the end of the movie takes place literally moments before the opening of the first Star Wars movie, A New Hope.

Solo has none of those moments. It tries to. It tries really, reeaaaallllllly hard to. But at the end of the day, there just aren’t any moments I can point to and proclaim “That was awesome! That was Star Wars!!” Again, a lot of this falls on the shoulders of the music score, and to a large extent the director, Ron Howard. In one case though, the filmmakers decide to include a character that I think maybe they thought would get the fanboys all lathered up, but what I think will end up being a miscalculated head-scratcher for most moviegoers, many fanboys included. I don’t want to really spoil anything, but a significant fan favorite character appears at the end of the movie, and it is a choice that will probably confuse and cause grumbling more than it excites.

In the end, I give this film a B-minus overall. The acting is good. The screenplay is clever and comprehensible. The special effects and look of the film are top notch. It’s a handsome, breezy summer movie. If that was Disney’s / Lucasfilm’s overriding ambition, then mission accomplished. Enjoy all the profits, and please continue to make more Star Wars films. If the ambition, however, was to add a film to the existing Canon of which all fans can stand up and point to with beaming pride, a film that fans will feel compelled to experience over and over to achieve the goosebumps contained therein, a film that enriches, elevates, and evolves the lore set down by the original trilogy, then, well, it’s back to the drawing board.

Say what you will about the prequels (and sure, there are plenty of nits to pick): at the end of the day, each film still contains a moment that any fan of Star Wars can come back to and re-watch and get excited about. Phantom Menace has the Pod Race and the Darth Maul / Obi-Wan fight. Attack of the Clones has a crazy ride through Coruscant, a planet of dizzying skyscrapers and alleyways, an asteroid chase, a huge fight with tons of Jedi in their primes, and a crazily choreographed showdown where Yoda wields a lightsaber. Revenge of the Sith has an epic space battle to open the movie, the battle between Obi-Wan and a four-lightsaber wielding General Grievous, the fall of Anakin and rise of the Emperor, and climactic cross-cut duels between the Emperor and Yoda side by side with a showdown between Anakin and Obi-Wan on a lava planet.

Solo: A Star Wars story doesn’t really have any of those moments. It tries to. It desperately wants to. But at the end of the day, it’s only a “fun, summer movie.” 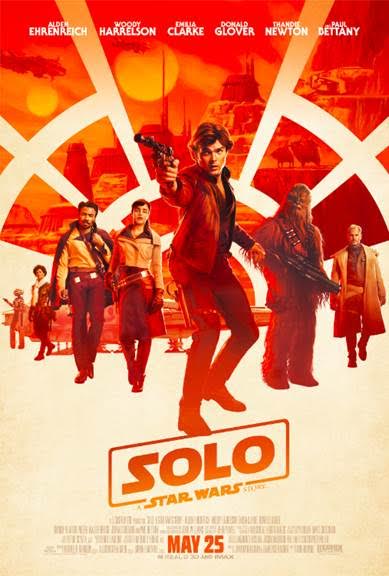