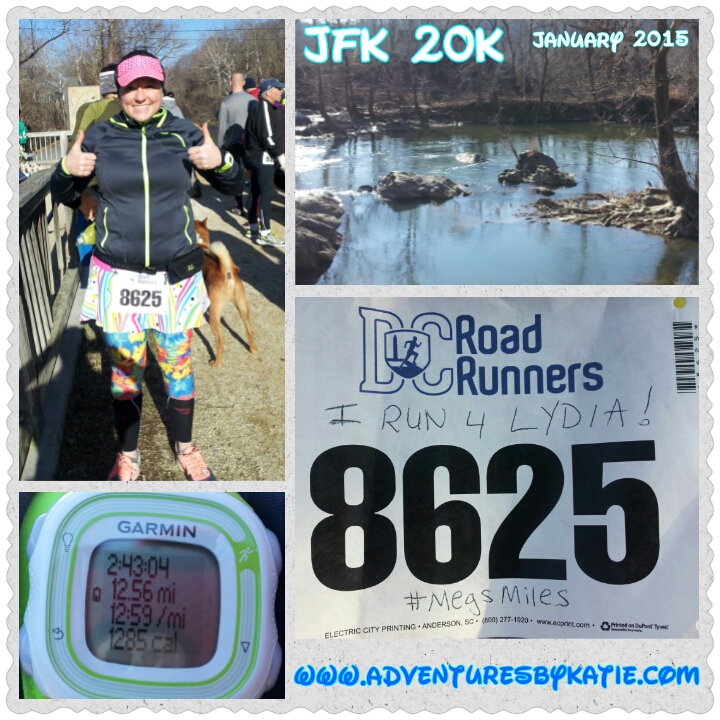 Last Saturday I trekked to Washington, D.C. to run a 20k with the DC Road Runners. This race took place on the C&O Canal, starting at Fletcher’s Cove. My car GPS didn’t really like the address and I ended up in some dead end street above the canal, but luckily I figured out where I was supposed to go and made it to the race in time. I had never been to Fletcher’s Cove before and it was quite an experience. The path into the parking area goes through a tiny tunnel, with one way traffic only. It was a bit creepy going through that small tunnel. 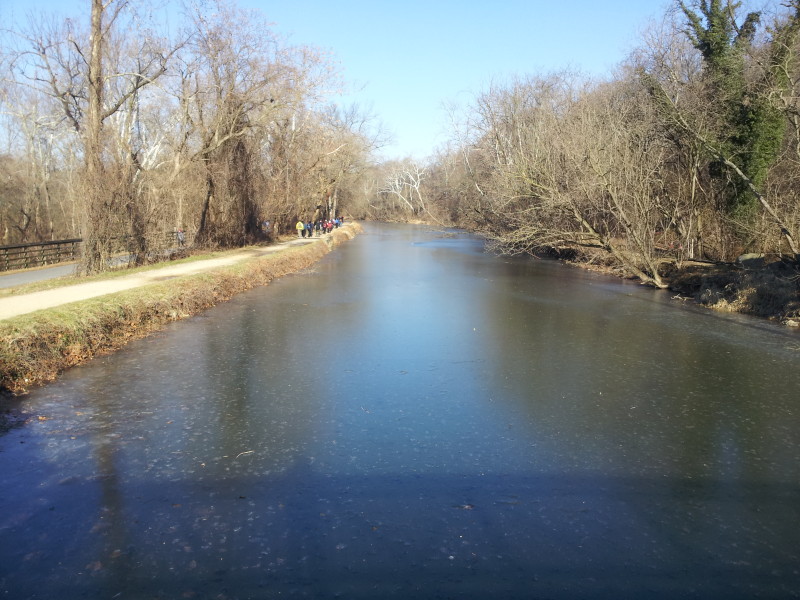 I quickly went to get my bib, went to the bathroom, and went back to my car for a few minutes before the race began. It was so cold!!! The race started at 10am (the 5k started at 9), which I appreciated. The first thing I noticed before beginning was that the canal was frozen! Solid! But more on that later… 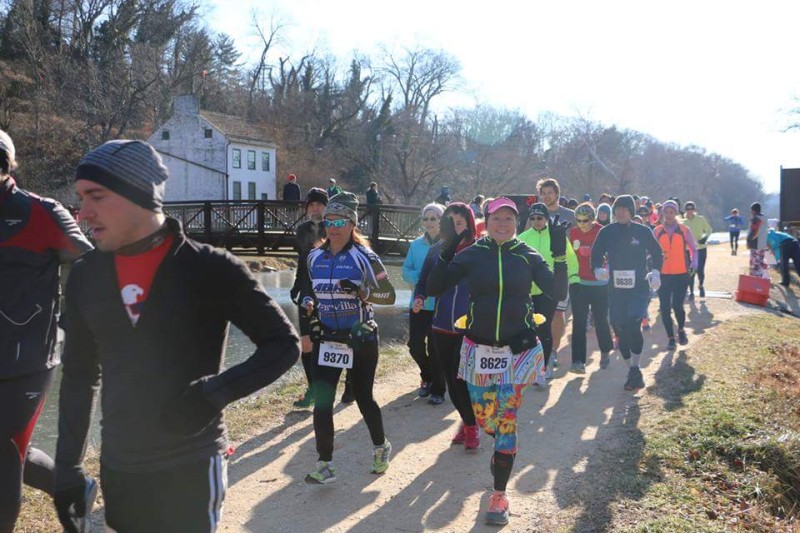 The race started on time, and I was off! I appreciate the beginning photos, especially because you can see my AWESOME outfit.

1. I needed to stay warm
2. I like to dress festively
3. I’m trying out my new Compression Sleeves

(whew, I had a hard time getting these up over my calfs – but they did help keep my legs from getting too tired!)

Though, I do need some more colorful running jackets; this grey one is so boring! 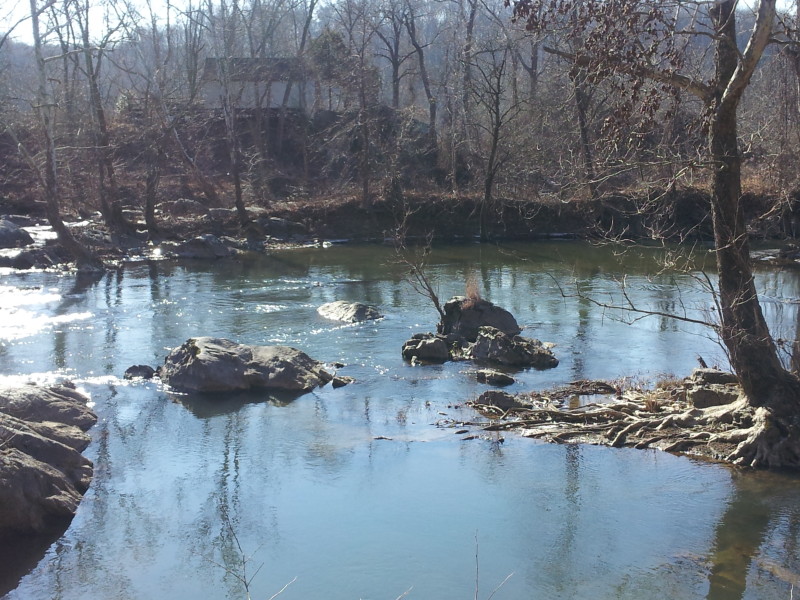 This trail is the same course as the one starting at Carderock from my Potomac River Run Half Marathons I did last year, except it goes in the contrary direction, and starts a few miles away. But a lot of the course was the same, which is good because I think it is very pretty. On one side is the Potomac River and the other side is the canal. Like I said earlier, the canal was frozen. I was in awe at how many people were braving the ice. There were tons of kids, ice skaters, and even an adult hockey team playing out on the ice. I have no idea how thick the ice was, but I was nervous seeing them out there!

At one point I heard this thunderous sound. It made me jump! I think it was some of the ice cracking (but this was down some from where the ice skater people were). But, still…! 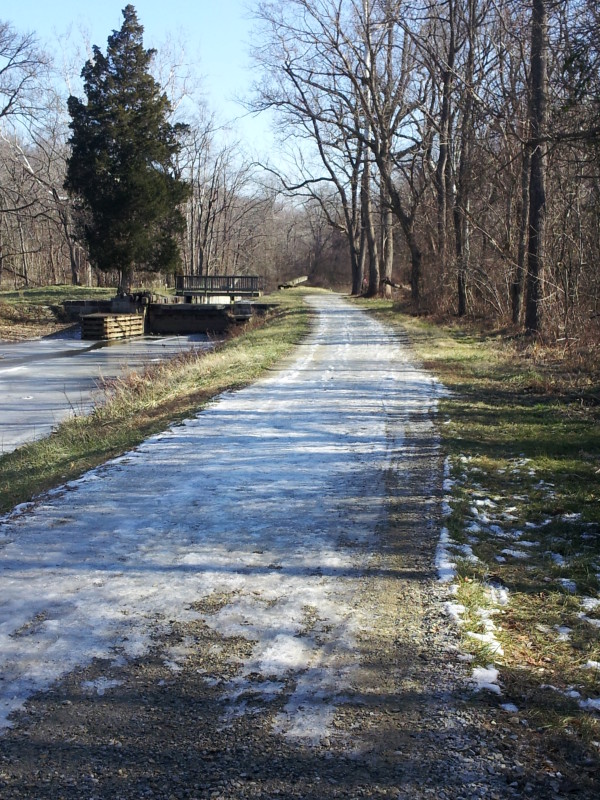 I started to get lapped as soon as I finished mile 4. Man, there are a lot of fast people! Also at this time, the path started to get really icy. A lot of the running took place on the edge of the path where there was dirt and grass. A few times I just had to stop and walk. There is no way that I was going to fall and get hurt (and knowing me, I would). So I was extra careful, even if it took be a bit longer.

In the middle of my ice run, I reached the turn around point and turned back. By this time, the course was very cleared out. I still had 10k to go, and at this point the race was very mental. There wasn’t anyone around me to keep me company. It was just me, the ice, and the occasional runner not with the race. These are always the toughest times to run! It takes so much effort to keep going. But I did.

Around mile 8 I started to get really tired. I hadn’t run this far or long since the PRR Half back in November. I drank some Nuun and had a Huma Chia Energy Gel

to try to get my energy up. And I kept trekking. 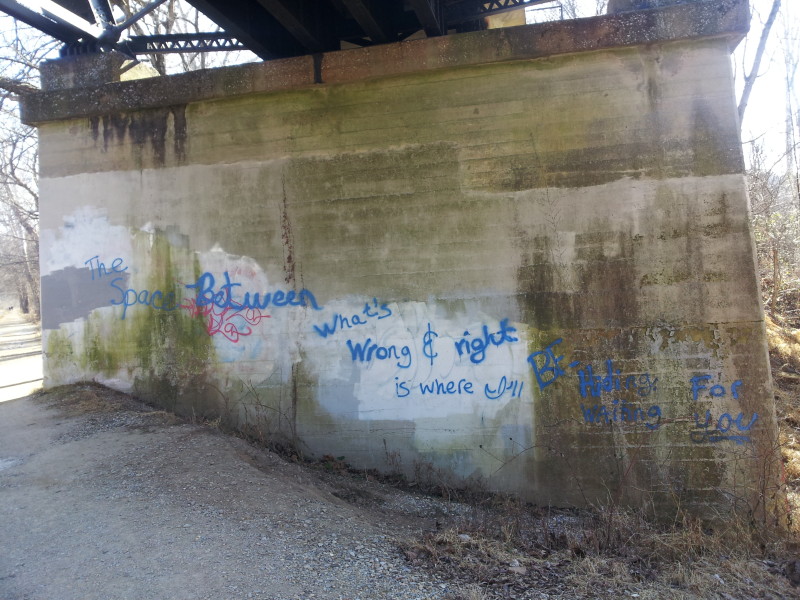 I passed this graffiti and had to stop to take a picture. How creepy.

I finally finished, 2:42:53 later. I was fourth from the end, but that is ok. Most of the people had already left to go home, including the finish line photographer (bummer!) and the bananas.

Well, it was a good way to get going for this new year, even though it was cold and a little rough mentally. I have a bunch of races coming up that I need to be prepared for, and this was a good kick-off for my long ones. 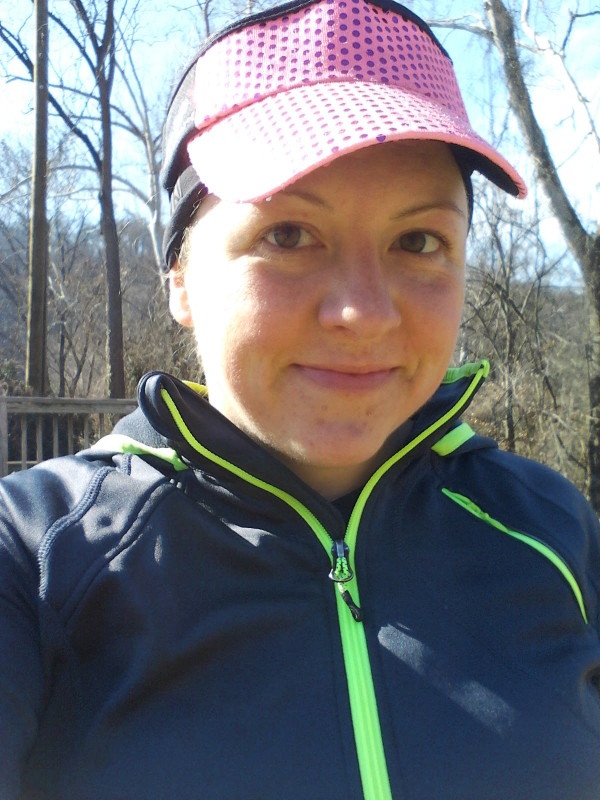