If you remember liking (adoring?) the first Incredibles movie once upon a time, you will likely not be disappointed by the second iteration – Incredibles 2 – other than asking aloud why it took so long to come up with another generous helping of the exploits of Elastigirl, Violet, Dash, Jack-Jack, and the eponymous Mr. Incredible. So, that being said, let’s get into the Good, the Better, and the Beautiful.

Don’t believe what the other reviewers say: the real star of this movie is Michael Giacchino, the film’s soundtrack composer. Lending virtually each and every scene a retro-futuristic cozy blanket of whatever it needs (suspense, nostalgic domesticity, danger, whimsy, and heroism), Giacchino is up to the task, and then some.

While many now plan to stick around while the credits roll in hopes of encountering a bonus scene (Thanks Ferris!), there is no such scene to be found here. However, Giacchino has sprinkled in a good enough reason to make the wait worth it: he has realized superhero theme songs for Elastigirl and Frozone. While I laughed with delight at many of the comedic escapades in the film, these last two unexpected songs gave me the deepest belly laughs.

NOAM CHOMSKY MUST BE ROLLING (WITH DELIGHT) IN HIS GRAVE

If you end up seeing the film a second time, and missed it the first time, pay really close attention to what the film’s either brilliantly (or culturally tone-deafly) named villain, The Screenslaver, delivers as “villainous” propaganda to the masses during the visually arresting sequence when Elastigirl goes to confront him. You’ll hear all sorts of milquetoast bon mots such as, “You don’t talk, you watch talk shows.” Sometimes, you have to wonder where the filmmakers are at in 2018, but no need to worry. The film carries on without jabbing the audience too pointedly. Meanwhile, I have to imagine that the filmmakers intended for all these Millenial-tinged poinards, culled from the likes of a Noam Chomsky or a Jean Baudrillard, to dovetail beautifully with all the Frank Lloyd Wright homages littered throughout. Well done.

REQUIEM FOR A NUCLEAR FAMILY

By the end of the film, Elastigirl has grown up to become Mrs. Incredible Mom, while Mr. Incredible has evolved into Elasti-dad. Perhaps the most brilliantly conceived scene in the film is Elastigirl’s first mission to protect and then rescue the occupants of a shiny new monorail on its maiden voyage. The initial vision of Helen zipping off to work, correctly leaving behind her husband to maintain their domesticity, has the elan needed to overcome the hidden oppressions and prejudices that saturate the film’s backdrop of Fifties and Sixties décor and understated oppressiveness.

The film wisely beats up Mr. Incredible at home, knowing full well he can take the punishment. Dusting off Algebra, reading to a newborn who naturally refuses to fall asleep, letting the petulant teenage daughter go so that she can come back on her own terms, while communicating (sharing?) his frustrations honestly with his wife so that they can communicate in a trustworthy environment. It’s a beautiful vocal performance by Craig T. Nelson, filled with just the right tinge of hubris and gentle bewilderment.

The two sequences that cackle with the most comedic grease lightning feature Jack-Jack. The first is when Bob takes his unnervingly inter-dimensional baby boy to be scrutinized by Edna, the family’s couturiere from the first film. Seeing Edna fall in love with Jack-Jack has to be one of the most important ‘ships I never realized I needed.

Later on, there is a brilliantly mad-cap sequence involving Jack-Jack tussling with a determined squirrel (at least I think it was supposed to be a squirrel). While much of the film seems to be one long extended homage to Hitchcock’s North by Northwest, this sequence has all the needed respite of a Charlie Chaplin silent movie escapade. Worth the price of admission alone. 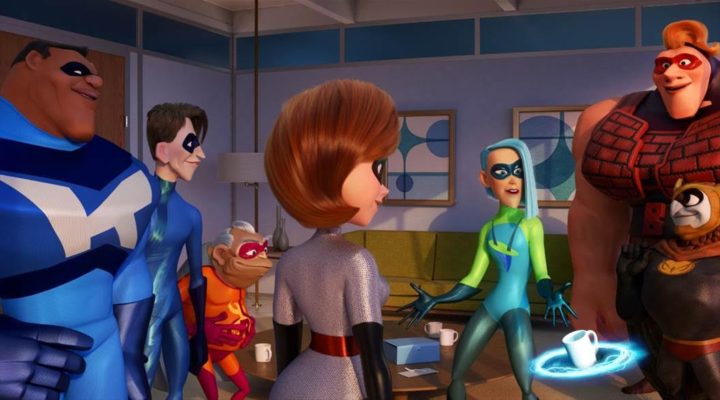 You see the villain coming from a mile away. You know you are being led to believe it is one character only to discover it is the other one who has been pulling the marionette strings the whole time. Yet, for all its predictability, there are lots of cards Bird pulls from his sleeve to keep the plot propulsive. My favorite is the line-up of semi-retired misfit superheroes, perhaps a dig at the X-Men franchise, with such one-note, one-liners as Void, Screech, and Reflux. The most meme-worthy scene has to be the one where Violet unexpectedly confronts her crush at the diner he works at.

Additionally, there is a short film that plays before the movie that at first seems to employ some weird alchemy of Kafka-esque ennui only to later reveal itself as ONE GIANT METAPHOR. Still, I found it delightful. It has one rich gasp to yank out of the audience, and a tender ending in the best Disney-fied sense of the term.

Incredibles 2 was worth the wait! If you’re reading this review and haven’t seen it, then by all means get thee to your local multiplex. This one deserves to be seen on the big screen surrounded by a coterie of delighted children. If for some reason you never pressed Play on the first Incredibles, I would suggest you excavate that film first before seeing its sequel.

We actually watched the first film on the Disney Channel a couple of days ago to refresh our memory. We are very lucky as we have cable TV and on-demand services so we can always find something to watch! I always seem to catch the latest Disney films whenever I flick through our cable channels. There is just something so wholesome about sitting together as a family to watch a film that everyone will enjoy!

Furthermore, did you know that in the United States pay TV brought in $85.5 billion in revenue in 2019? I was so surprised! This just goes to show that although streaming services are definitely rising in popularity, cable TV is not going anywhere just yet!

Anyway, here’s to hoping we don’t have to wait another fourteen years for a third film. That being said, it would be pretty funny if they came out with another in two to three years, yet age the characters a significant amount. I, for one, cannot wait to see the misadventures of hormonally super-charged teenage Jack-Jack!