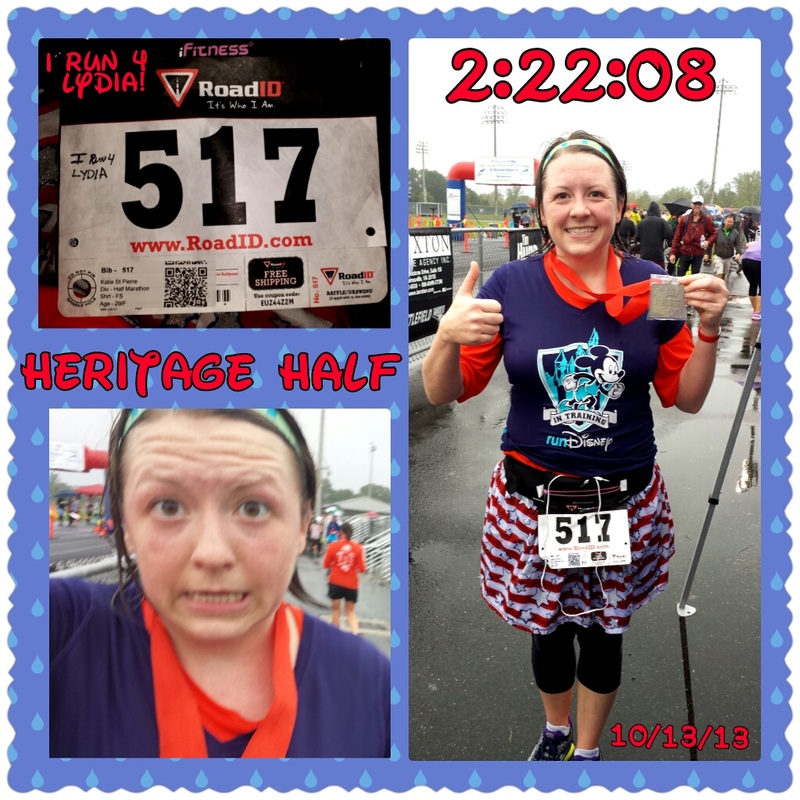 On Sunday I was up at 5 a.m., getting ready to go run the Heritage Half Marathon.

It had been raining for days before, and this morning was no different.

Nontheless, I got dressed and drove to the high school where the race was starting. I picked up my bib and shirt (deciding to wear the long sleeve shirt under my runDisney shirt, and waited under the awning for the race to start.

At 7:00, we started to rain. It was raining and I needed a heat. But I continued on. It rained the entire race, but I was lucky that my Gortex shoes (though they are not the most comfortable) kept water out until mile 10. I was doing pretty well with my pace, hanging around 10:45/mile, but with water in my shoes, it was a different story.

It’s like running on a water bed, except your feet are engulfed in water. It was the weirdest feeling, and not very comfortable. I had to slow down and walk a lot more for those last three miles, but it was ok. There was a person whose pace was about the same as mine and we kept each other motivated.

I finally got to the track and went to finish the race! Huzzah! I finished in 2 hours and 22 minutes…way faster than my half back in the spring, which was over 3 hours! I am pretty proud of the way my training has been going. And imagine what my time could have been if it weren’t raining…!  I am going to submit this time to Disney, and will get to move up a corral for Dopey because my pace is faster than what I submitted from Moose on the Loose.

The race was good, and I wasn’t even that sore. Just a little tight. I was definitely more sore from last week’s Tower of Terror 10.

And I got 13th place in my age group!!!! I’m not telling how many were in that group, but I was not at the end!

My only complaint is that I signed up for a women’s small shirt and they gave me a women’s extra-large. Don’t have small as an option, if you won’t have it to give out… 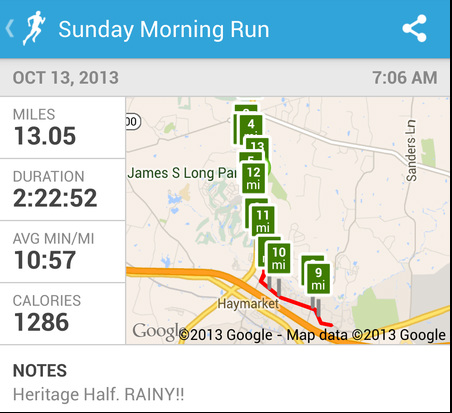