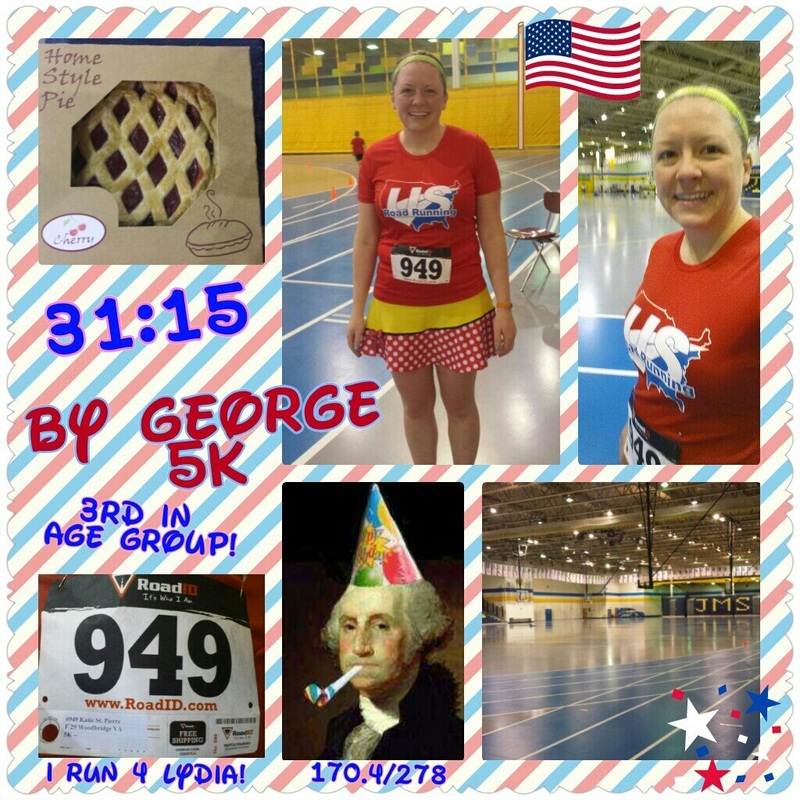 This BY GEORGE race (run by the Potomac Valley Track Club) was supposed to take place at a park on Saturday, February 15. But due to the foot of snow we got the previous week, this race was rescheduled for Sunday, February 16 at the Thomas Jefferson Community Center in Arlington, VA which has an indoor track.Originally 200 people were signed up for this race, but only 59 people ended up coming for the rescheduled race. None of my family came. They are boring and wimpy!!!

The race took place in heats, in order to keep the track less crowded. All the women went first. All 11 of us… It was 25 laps around the 200-meter track. It was very boring. Since they got the gym at the last minute, there was no music (and I didn’t turn on my phone music because no one else had theirs). Everyone was so hardcore! Most of the girls were really fast and quickly lapped me. But I kept going on.

I ended up finishing in 31:15, which, looking back at my records, gives me a PR of a real (non-virtual) 5k race! I think it was because there were no hills. Just flat going around and around. I ended up winning 3rd in my age group – and I won a cherry pie!!! My first age group win! Yay! And do you notice my new Sparkle Skirt? Very comfortable and cute 🙂

The race was well organized and everyone was really friendly. Even though there were some big competitors, everyone was nice and easy-going.

I was certainly glad to have had this race rescheduled, and running inside was an interesting experience. I won’t rule out another indoor race, but I don’t think I am ready for an indoor marathon!