Moose on the Loose 10-miler 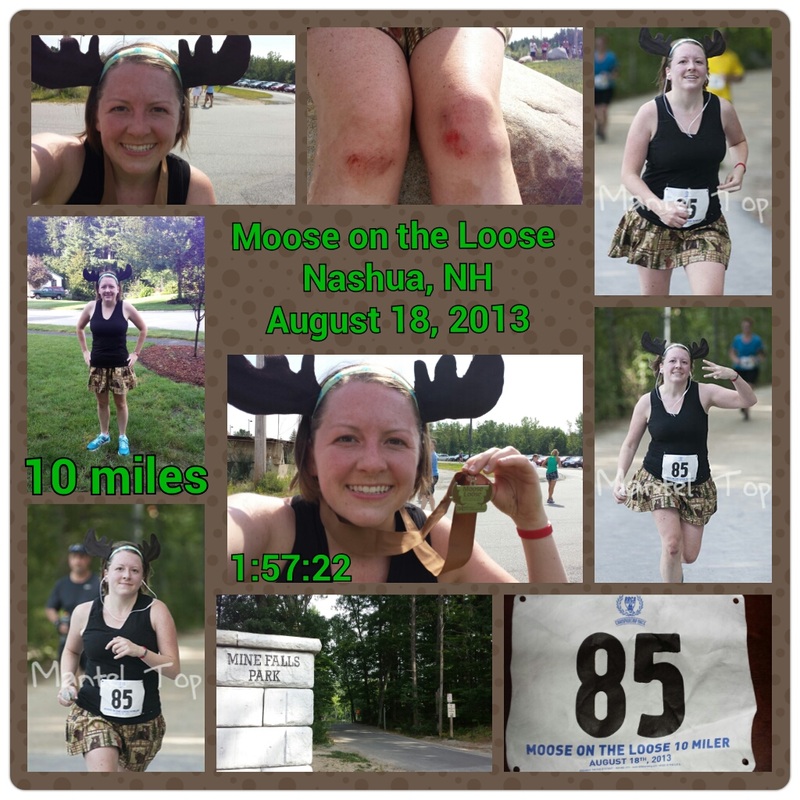 While in New Hampshire I ran a 10-mile race. I was super excited to find this race in Nashua where we were staying for a wedding.
I got up early and got to the starting point. The race was a trail run through Mine Falls Park. The course was 4 loops through the park.

Towards the end of my first loop I tripped and fell. I ended up skinning my knees and hands pretty bad, but I knew I had to keep going. At the water stop I rinsed off my knees, but couldn’t find first aid anywhere. So, I got to continue running with blood running down my legs!

After the fall, not only did my knees and wrists hurt, but my IT band started to act up as well. This was disappointing because it hadn’t been hurting in a while. I blame it on twisting my leg when falling. Anyways, I had started out at running 3:15 to :45 intervals, but after my accident I gave up and ran as far as I could until I needed a break, and then walked. I looked pretty pathetic while “running” (really I was hobbling along), but I wouldn’t quit. I HAD to finish.

And I did! I actually had a surprisingly good time. I beat 2 hours, which was my original goal! Go me! I was almost one of the last finishers, but who cares! (This race was a state championship competition, so there were a lot of fast runners)

I had a great time despite my accident and came home with a finishers medal and a pint glass for being one of two dressed up festively.

Thanks for the confidence to know that I can continue towards my goal despite unfortunate odds.